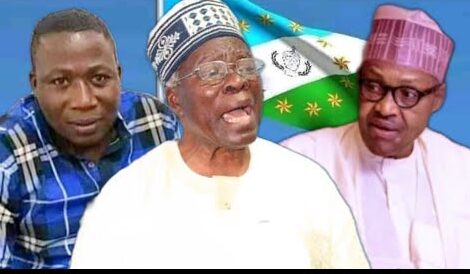 … As Lagos Police, Security Agencies Embark On ‘Show Of Force’

There is no going back on the planned Yoruba Nation rally in Lagos on Saturday, leader of the Ilana Omo Oodua (IOO), Emeritus Prof. Banji Akintoye said on Friday.

A statement issued by its General Secretary, George Akinola and its legal adviser, Olasupo Ojo urged the police to make sure the protest was not hijacked as envisaged by the CP.

Recall that the Lagos State Commissioner of Police, Hakeem Odumosu had on Thursday warned protesters to stay away from Lagos as no protest would be allowed in the state.

But the IOO said the rally would go on as planned and that it would be peaceful.

The group claimed to have written to Odumosu and copied Governor Babajide Sanwo-Olu  to ensure that hoodlums did not hijack the protest.

“Our rally scheduled to hold on Saturday will still hold without any fear or intimidation and we promise to be peaceful like we have always been.

“We have been peaceful, orderly and lawful at everywhere we have visited, therefore, we call on the Lagos State Police Command to ensure that the rally is not hijacked by hoodlums.

“We are happy that the Police already know that hoodlums are likely to hijack the rally. Now, we call on the police to ensure such does not happen like it didn’t happen in Ekiti, Ondo, Osun, Oyo and Ogun States respectively where we’ve held our rallies,” the statement said.

According to IOO, It is the duty of the Police to safeguard “our peaceful demonstration and protect us. On our own part, we promise to cooperate with the police towards ensuring that the rally is peaceful and orderly.”

Meanwhile, the Lagos State Police Command and other security agencies on Friday embarked on what they called ‘Show of Force’ around Lagos State to confirm their preparedness and commitment to continuous protection of lives and properties of the people of Lagos State.

The ‘show of force’ was also aimed at sending a warning signal to the organisers of the said mega rally or any group of persons planning to stage any rally or procession in the state despite the warnings issued during the joint press briefing by the Commissioner of Police, Lagos State, Hakeem Odumosu and the Commissioner for Information and Strategy, Lagos State, Mr Gbenga Omotoso on Thursday.

The command and the Lagos State government had warned the organisers of the planned Oodua Republic Mega Rally, scheduled for Saturday, 3rd July 2021, at Gani Fawehinmi Freedom Park, Ojota, Lagos, to steer clear of Lagos State, considering the available intelligence reports on the planned rally and to forestall any breakdown of law and order.