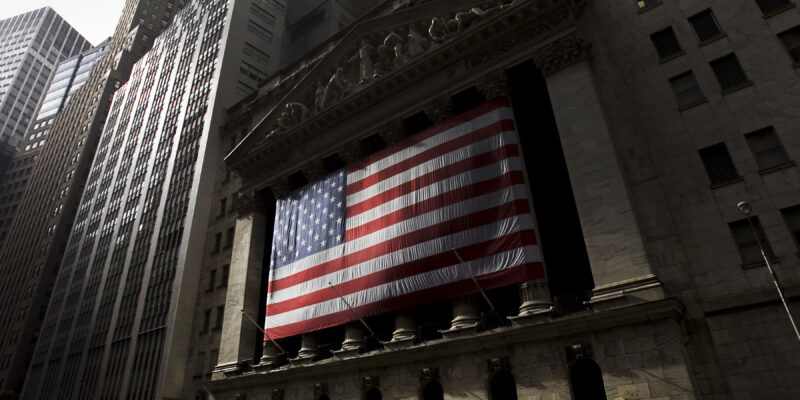 A large American Flag hangs on the fascade of The New York Stock Exchange on Wall Street in the New York Financial District on October 24, 2009. (Brett Ziegler for USN&WR)

The United States, has chided Nigeria for not taking significant measures to combat insecurity throughout the country .

The United States Department of State, in its 2020 International Religious Freedom Report on Nigeria, noted that the constitution guarantees the country as a secular state.

The United States, in its executive summary of the report noted, “Various sources said the government did not take significant measures to combat insecurity throughout the country; the International Crisis Group said that state governments relied heavily on armed vigilante groups to help quell the violence, which it said was counterproductive.

“Some said this lack of government response exacerbated insecurity and failed to address underlying causes.

“A report by the Armed Conflict Location and Event Data Project (ACLED) stated the presence of state forces was “too inconsistent and limited to protect or support communities, or mitigate and suppress violence.”

“The government continued its detention of Sheikh Ibrahim El-Zakzaky, head of the Islamic Movement in Nigeria (IMN), a Shia organization, and his wife despite a December 2016 court ruling that they be released by January 2017.

“All the other members of IMN arrested during the 2015 clash with the military were released by February. On September 29, the Kaduna State High Court rejected a motion filed by El-Zakzaky and his wife to dismiss the case. The court adjourned the case to November and later to January 2021.

“During the year authorities arrested and detained two individuals under blasphemy laws: Yahaya Sharif-Aminu, sentenced to death for blasphemy on August 10, and 16-year-old Umar Farouq, sentenced to 10 years of imprisonment.

“Authorities detained Mubarak Bala, head of the Humanist Association of Nigeria, in April without filing any charges, although his attorneys stated they believed he was being held on charges related to allegations of insulting Islam on Facebook.

“The government at both the federal and state levels put temporary limitations on public gatherings, including religious services, in response to the coronavirus pandemic. Most churches and mosques throughout the country closed in April and May, during which time state governments arrested both Christian and Muslim leaders for violating lockdown orders. Beginning in June, the government’s easing of lockdown restrictions included reopening religious houses of worship with prevention measures in place.”

The United States further said terrorist groups, including Boko Haram and ISIS-West Africa (ISIS-WA), attacked population centres and religious targets and maintained a growing ability to stage forces in rural areas and launch attacks against civilian and military targets across the North East, according to observers.

“The groups continued to carry out a range of attacks targeting the local civilian population, including churches and mosques.

“Violent conflicts between predominantly Muslim Fulani herdsmen and predominantly Christian farmers in the North Central states continued throughout the year. Some religious groups and nongovernmental organizations (NGOs) continued to express concern that this conflict had religious undertones.

“In addition to religious differences, local authorities, scholars, and regional experts pointed to ethnicity, politics, criminality, lack of accountability and access to justice, and increasing competition over dwindling land resources as among the key drivers of the violence. Attacks and killings attributed to Muslim Fulani herdsmen continued during the year.

“According to ACLED data, total civilian deaths numbered 2,454 during the year, compared with 2,198 in 2019 and 3,106 in 2018. Some domestic and international Christian groups stated that Muslim Fulani herdsman were targeting Christian farmers because of their religion.

“Local Muslim and herder organizations said unaffiliated Fulani were the targets of Christian revenge killings. Local and international NGOs and religious organizations criticized what they said was the government’s inability or unwillingness to prevent or mitigate violence between Christian and Muslim communities. Christian organizations reported several cases during the year of Muslim men kidnapping young Christian girls and forcing them into marriage and conversion to Islam,” the United States added.

The United States also said its embassy in Abuja, the consulate general in Lagos and visiting U.S. government officials voiced concern over abuses and discrimination against individuals based on religion and religious tensions in the country in discussions throughout the year with government officials, including the Vice President, cabinet secretaries, and National Assembly members.

“Embassy and consulate general officials further strengthened their engagement on religious freedom issues with a wide range of religious leaders and civil society organizations, emphasizing the importance of interfaith relationships.

“The ambassador and other senior embassy officials engaged with various religious groups throughout the year and delivered remarks on the importance of the respect for religious freedom at large religious gatherings.

“To mark Religious Freedom Day on January 16, the ambassador hosted an interfaith roundtable with religious leaders to discuss issues of peace and security and to promote religious freedom.

“In July, the embassy held a roundtable with prominent religious leaders from different churches and dioceses in the country and discussed the violence occurring in the country, providing an overview of challenges and opportunities for affected communities.

“Interfaith discussions sought to identify areas of consensus and narrow the gap between competing narratives over the drivers of conflict in the country. Embassy officials and the Counselor of the Department of State met with religious leaders to discuss religious freedom and security during his visit in October.

“On December 2, 2020, in accordance with the International Religious Freedom Act of 1998, as amended, the Secretary of State designated Nigeria a “Country of Particular Concern” for having engaged in or tolerated particularly severe violations of religious freedom and announced a waiver of sanctions that accompany designation in the “important national interest of the United States,” the United States disclosed.