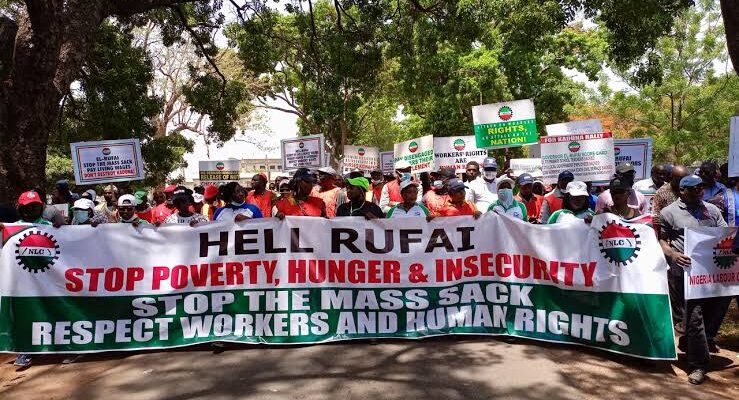 By Braxton Ilobah
The  University of Lagos Chapter of the Academic Staff Union of Universities (ASUU), has condemned in strong terms what it described as “undemocratic, draconian and savage attack on labour and peaceful protesters” by hoodlums allegedly supporting the Kaduna State Governor Mallam Nasir El-Rufai.
In a statement on Wednesday, the Union Chairman, Dr. Dele Ashiru said that “to have declared the President of the Nigerian Labour Congress (NLC) and other labour leaders wanted, has exposed  governor El-Rufai as an undemocratic and unprogressive element who does not understand that the right of the people to protest against a tyrannical and wicked government is an inalienable right guaranteed by our constitution and respected in all civilized societies.”
“The governor’s declaration is therefore not only unwarranted, it is unconstitutional, ridiculous, vextatious and unjustifiable.”
The Union pointed out that “Mallam Nasir El-Rufai should realize that he became governor of the state by the votes of the very people he now wants to emasculate through his reckless and unbridled neo-liberal policies dictated by forces outside Kaduna state and Nigeria.”
“Our Union calls on all Nigerian people to stand in unison against this creeping tyranny in Kaduna state before it becomes an example for other incorrigible El- Rufais in Nigeria.”
“All affiliates of the Nigerian Labour Congress and other Civil Society Coalitions are enjoined to be on red-alert until the leviathan in Kaduna is brought to his knees. A people united, can never be defeated” the Union declared