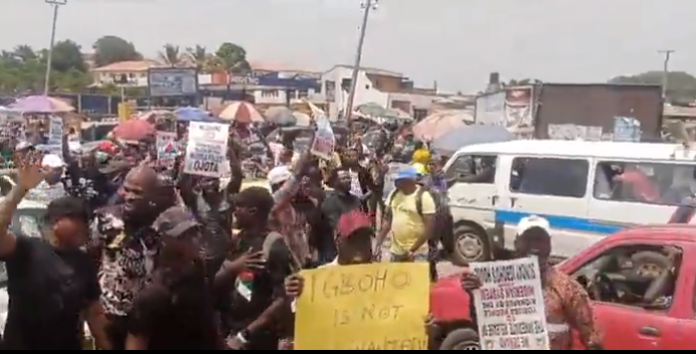 Supporters of the Yoruba activist Sunday Adeyemo also known as Sunday Igboho have taken to the streets of Ibadan, the Oyo State capital, to protest last Thursday’s midnight raid by the Department of State Services on the residence of the Yoruba nation activist.

The protesters gathered in front of Igboho’s house in the Soka area of Ibadan from where they took to the streets around 12 noon on Wednesday.

They were heard chanting “No retreat, no surrender!”, “Oodua Nation!”, “Sunday Igboho is not a criminal!” amongst other phrases. They also carried placards displaying similar phrases.

A leader of the protesting youths, whose name was unknown as of the time of filing this report, addressed the gathering before they took off.

He said they would march to the palace of the Olubadan of Ibadanland, Oba Saliu Adetunji; and from there proceed to the Government House, amongst other places.

“We want them to bring the killers of Adogan and Alfa to book.

“The government must pay the N500m damages as requested by Igboho’s lawyer for the destruction of his house and property during the invasion.

“We want the Obas to make this happen within seven days,” he said.

The protesters who were dressed in black attires called on the DSS to release the arrested persons.

They moved to the Lagos/Ibadan expressway, blocked the road for some minutes before moving to Sanyo and Soka areas of the Oyo State capital.

They similarly moved to Challenge and Molete areas demanding for the immediate release of the arrested persons.

As at the time of filling this report, the protesters are on their way to the palace of the Olubadan of Ibadan, Oba Saliu Adetunji, to demand the release of the arrested persons.

Recall, DSS invaded the residence of Igboho in a Gestapo style around 1am on Thursday. Although Igboho escaped the raid, his house and cars were riddled with bullets while bloodstains splattered over the floors of the house.

The DSS claimed responsibility for the death of two of Igboho’s associates in a gun duel. Thirteen of Igboho’s guards and close associates were later paraded in Abuja on Thursday evening.

The secret police had since declared Igboho wanted.

The activist is being accused of stockpiling weapons to allegedly destabilise the country under the guise of agitation for Yoruba nation but he has since denied the allegation, saying he protects himself with charms and not weapons.

Presidential spokesman, Garba Shehu, on Tuesday, lauded the raid. He said Igboho is a militant who conducts acts of terror, adding that the regime won’t condone any act by secessionists.

However, the DSS raid had been condemned by many Nigerians including human rights lawyer, Femi Falana, SAN, who described it as a “nocturnal coup”, arguing that no law in Nigeria allows security agents to arrest anyone in the dead of the night.

Also, Nobel Laureate, Prof. Wole Soyinka, had condemned the invasion which he described as “bizarre”.

Similarly, Southern governors, on Monday, resolved that security agencies must notify them as the chief security officer of their states before they carry out any operation within their domain.