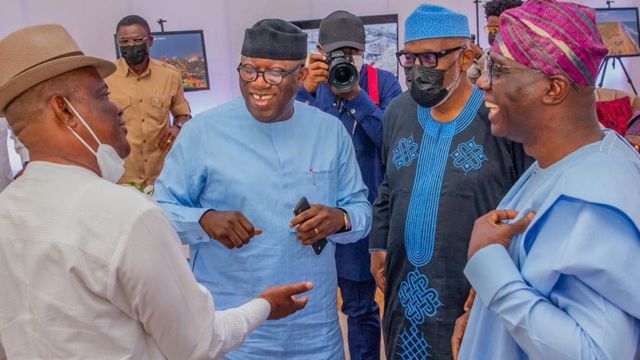 Various resolutions by the Seventeen Southern Governors’ Forum on sundry issues in the polity at their Lagos meeting on Monday, have been endorsed.

The endorsement came from members of the House of Representatives from the region.

Chairman of the Southern Caucus, Victor Nwokolo, made this known in a statement issued on Tuesday and titled, ‘Southern Reps Backs Southern Governors On Presidency, Electronic Transmission of Election Results, PIB, Others.’

According to the caucus, the resolution by the governors reinforces their stance, as federal lawmakers, that “our nation must and should exist on the pillars of justice, equity, fairness, peaceful co-existence and mutual respect, particularly in the political, economic and structural management of our national diversity.”

The statement read in part, “We note that the demand that the next President of Nigeria should come from the southern region unambiguously represents the opinion of the majority of Nigerians across board, in tandem with the already established rotation of presidency position between southern and northern Nigeria.

“Furthermore, against the backdrop of our commitment towards free, fair, credible and transparent elections, the members of the House of Representatives from the South also back our governors in rejecting the moves to outlaw the electronic transmission of election result in the Electoral Act, as well as the confirmation of exclusive jurisdiction in pre-election matters on the Federal High Court.

“We hold that electronic transmission of results directly from the polling unit is a firm step towards the elimination of result collation related malpractices, including alteration of figures, mutilation of documents, snatching and diversion of ballot materials on transit to collation centres, among others.

“The attempt to tamper with the Electoral Act to remove electronic transmission of result is therefore a malicious and unpatriotic act aimed to emasculate our electoral system, undermine our democracy and destabilize our dear country, and such cannot be condoned or justified under any guise whatsoever.”

The statement further read, “On the PIB, the southern members of the House of Representatives also back our governors in rejecting the proposed 30 per cent share of profit for the exploration of oil and gas in the basins.

“We also reject the moves to vest the ownership structure of Nigerian National Petroleum Company Limited in the Federal Ministry of Finance and support the governors in their resolve that such should be held in trust by Nigeria Sovereign Investment Authority, since all tiers of government have stakes in that agency.

“As lawmakers, we insist that the 30 per cent share of profit as well as vesting ownership structure of the proposed NNPC on the ministry of finance instead of the NSIA do not reflect the desired essentials of justice, equity and fairness.

“We, however, note the support lent by our governors to the 5 per cent share of the oil revenue to the host community as recommended by the House of Representatives and we assure that every effort would be made to sustain our position at the harmonisation level.”

On security, the southern lawmakers restated their support for the establishment of state police and ban on open grazing by southern states, stressing that governors, as Chief Security Officers of their respective states, must be duly informed before any security institution undertakes any operation in their states.

“We also fully support the resolution by the governors that deductions from the Federation Account for the Nigeria Police Security Trust Fund should be distributed among the states and Federal Government to combat security challenges.

“We believe that these steps are imperative in guaranteeing the security of lives and property in the states under the prevailing situation and circumstance in our country.

“The southern members of the House of Representatives restate our commitment to the unity, stability and peaceful coexistence in our country while applauding the southern governors for their unwavering patriotic stand on national issues, especially at this critical time in our national life,” the statement added.