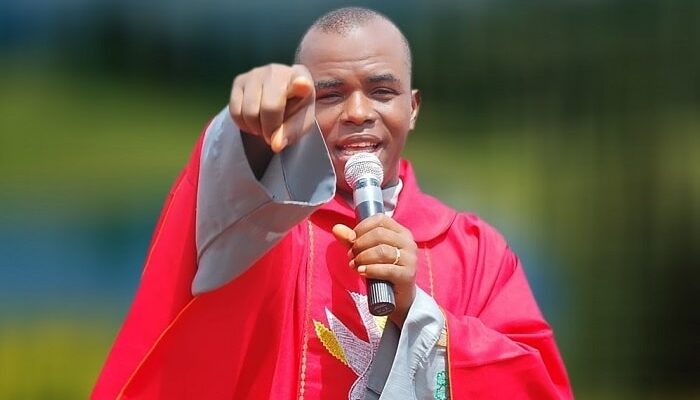 Rev. Fr. Ejike Mbaka, the Spiritual Director of Adoration Ministry, has attributed the current agitation in Southeast (Biafra) and the Southwest (Oduduwa) to hardship ravaging the entire nation.

Mbaka who pointed this out while speaking during a sermon, alleged that the Southeast Governors influenced Kanu’s fall.

The Cleric said arresting IPOB leader, Nnamdi Kanu, will not stop the agitation for the disintegration of Nigeria.

Recall that the Federal Government on Tuesday disclosed that after over two years of man-hunt, it has re-arrested Nnamdi Kanu.

He said, “Even if they put handcuffs on hundreds of Nigerians, agitation will not stop. Handcuffing them will even increase the agitation.

“You cannot tie people down when they can not afford what to eat. School fees in Enugu are at the highest level. And parents, after suffering to train their children, the children will still be at home.

“The agitation will not stop just because some people are handcuffed. So I asked our leaders to sit down and not sell their people.