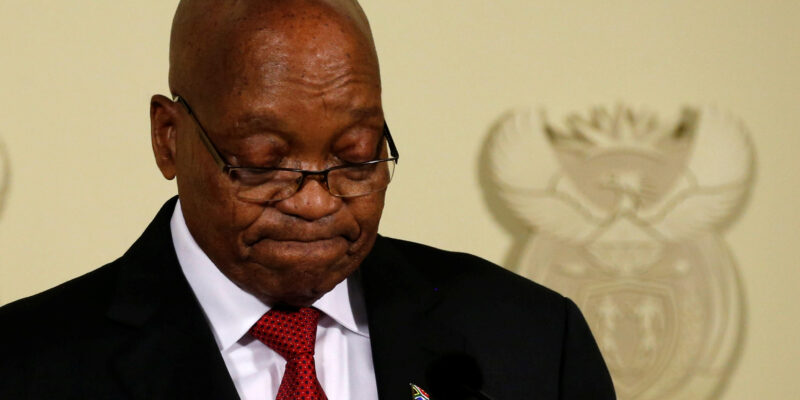 Former South African President Jacob Zuma on Friday lost a court bid  to overturn his arrest for contempt of court, days after turning himself in for a 15-month jail term in a case that has tested the post-Apartheid nation’s rule of law.

“Mr Zuma’s concerns about his health are not supported by any evidence,” the presiding judge in the Pietermaritzburg High Court said. “The application is dismissed.”

The Constitutional Court last week ordered Zuma jailed for refusing to give evidence at an inquiry into corruption during his nine years in office from 2009. read more

Zuma has separately challenged his sentence, partly on the grounds of his alleged frail health and risk of catching COVID-19.

Mzwanele Manyi, spokesman for Zuma’s charitable foundation, said Friday’s ruling against the former president was “purely academic”, since the application to block his arrest had been made last week but Zuma had since turned himself in on Wednesday night.

But the High Court judgment means he must stay in jail until the Constitutional Court hears his application to rescind his sentence on Monday.

The ruling came less than an hour after the High Court in Johannesburg dismissed an application by the secretary general of the African National Congress (ANC), Ace Magashule, to have his suspension over corruption charges in a separate case set aside.

Both politicians’ proceedings are regarded as a test of South Africa’s ability to enforce the law fairly – even against powerful politicians – 27 years after the ANC ousted South Africa’s white minority rulers to usher in democracy.

Magashule told local television station Newzroom Afrika that he would appeal the judgment against him.

For Zuma, the jail order has been viewed as the most dramatic chapter yet in his journey from a respected anti-apartheid activist to a politician tainted by charges of sleaze and corruption, all of which he denies. 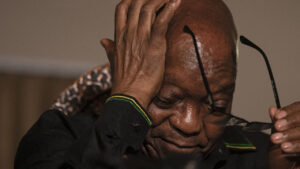 As a member of the ANC when it was a liberation movement, Zuma was jailed by South Africa’s white minority government.

Magashule is aligned with Zuma’s ANC faction, which has been the most potent internal force opposing the president.

“The oxygen of the loose alliance that makes up (Zuma’s) faction within the ANC is slowly being extinguished,” political analyst Daniel Silke said.

Police Minister Bheki Cele told public broadcaster SABC that law enforcement officers had been ready to step in if Zuma had not turned himself in by a court-ordered deadline.

“We were not going to defy the Constitutional Court decision, otherwise that would create anarchy and chaos in the country,” he said.

Zuma’s supporters, however, say he is the victim of a political witch-hunt.

An hour before Friday’s ruling, a Reuters photographer saw a group of protesters shouting “Zuma!”, burning tyres and blocking a road leading to Durban, the main city of Zuma’s KwaZulu-Natal province.

The corruption inquiry that Zuma has refused to cooperate with is examining allegations he allowed three Indian-born businessmen, Atul, Ajay and Rajesh Gupta, to plunder state resources and peddle influence over government policy. He and the Gupta brothers, who fled South Africa after Zuma was ousted, deny wrongdoing.

Zuma also faces a corruption case relating to a $2 billion arms deal in 1999 when he was deputy president. He denies the charges.