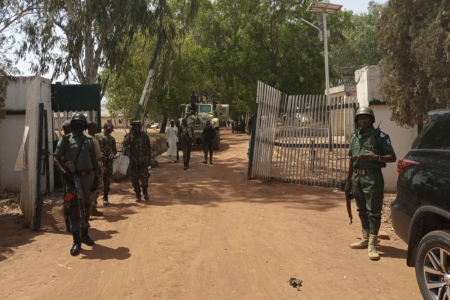 Nigerian soldiers and police officers stand at the entrance of the Federal College of Forestry Mechanisation in Mando, Kaduna state, on March 12, 2021, after a kidnap gang stormed the school shooting indiscriminately before taking at least 30 students around 9:30pm (2030 GMT) on March 11, 2021. - Gunmen raided a college in northwestern Nigeria and kidnapped at least 30 students, government officials and parents said on March 12, 2021, in the latest mass abduction targeting a school. (Photo by Bosan Yakusak / AFP) (Photo by BOSAN YAKUSAK/AFP via Getty Images)

Only five of the abducted of the Federal College of Forestry Mechanization, Mando in Igabi Local Government Area of Kaduna State students, have regained freedom.

The state Commissioner for Internal Security and Home Affairs, Mr. Samuel Aruwan, announced in a statement on Monday that the five are currently undergoing medical check-up at an undisclosed military facility in the state.

In the statement titled, ‘Five of the kidnapped students of Federal College of Forestry Mechanization recovered…Undergoing thorough medical check-up at a military facility’, Aruwan said, “The Nigerian military has informed the Kaduna State Government that five of the many kidnapped students of the Federal College of Forestry Mechanization, Afaka, Kaduna were recovered this afternoon and are presently in a military facility where they are undergoing a thorough medical check-up.

“The Kaduna State Government will provide updates on further operational feedback to be received on this case.”

Recall that the bandits in their large numbers invaded the school located opposite the Nigerian Defence Academy along the Kaduna International Airport road and abducted them Thursday night, March 11, 2021.

Some of the students were seen in their nightwear in a viral video released by the bandits on Saturday.

The 39 students had spent 26 days in the bandits’ den.