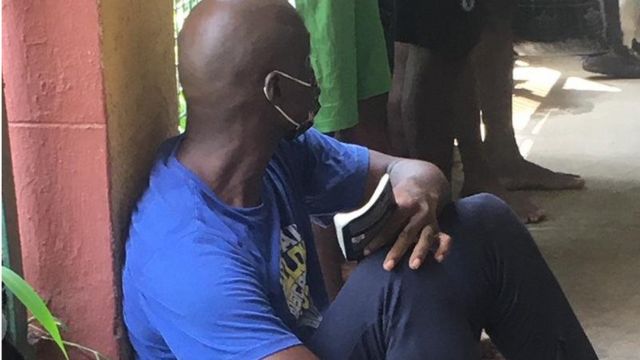 By Nkasi Kolie
Nollywood actor, Olanrewaju Omiyinka James , popularly known as Baba Ijesha, was on Thursday arraigned at a Special Offences and Domestic Violence Court section of Lagos High Court, Ikeja, on six-count charge bordering on indecent treatment of a child, sexual assault, attempted sexual assault by penetration and sexual assault by penetration.
The defendant, who engaged two Senior Advocates of Nigeria (SANs), Mr Dada Awosika and Mr Babatunde Ogala, alongside six junior lawyers, pleaded not guilty to the offences which contravene sections 135, 259, 262, 263 and 262 of the Criminal Law of Lagos State, 2015.
Justice Oluwatoyin Taiwo granted him bail in the sum of N2 million and ordered that he be released while the trial continues.
Taiwo said the defendant must bring the amount alongside two sureties — one of which must be a legal practitioner, and the second a family relation. The judge, however, said that the actor must perfect the bail terms and conditions within the next seven days.
Before the judge’s ruling, the Lagos State Director of Public Prosecution (DPP), Mrs Olayinka Adeyemi, who led the prosecution team of four other lawyers, after urging the court to take the plea of the defendant, asked for a trial date. She also urged the court to remand the defendant in a correctional facility, pending commencement of trial. But the defence countered, arguing that they had filed a bail application and had also served the same on the prosecution and urged the court to grant them an audience to argue it.
Adeyemi opposed the prayer, stating that her team was yet to verify the medical report which the defence relied on for the bail consideration.
Justice Taiwo, in a short ruling, granted the request of the defence team and asked the parties to join issues on the bail application.
The bail application was brought pursuant to section 105(2) and (3) of the Administration of Criminal Justice Law of Lagos State, 2015 and sections 35 and 36 of the 1999 Constitution of Federal Republic of Nigeria (as amended).
Lead defence counsel, Awosika (SAN), in a bail application supported by a 29-paragraph affidavit, asked the court to grant the defendant bail as guaranteed under the 1999 Constitution.
In response, Adeyemi urged that the defendant be denied bail. She described the defendant as a flight risk who can influence witnesses, if granted bail.
“I want to bring to my lord’s attention the nature of one of the offences – sexual assault by penetration – which carries life imprisonment.
“Bail is a discretionary right. It is not a constitutional right. On the nature of the offence and the strength of the evidence, there is a prima facie case before your lordship. The court should take judicial notice of the crime which is rampant in society,” she said.
The DPP described the offences brought against the actor as “grave” in nature.
The prosecuting counsel said the court should be careful in its handling of the bail application, noting that the defendant could jump bail, while his popularity could also affect the evidence against him in the case.
The judge said the trial would begin on July 26 through 27 and 28, respectively