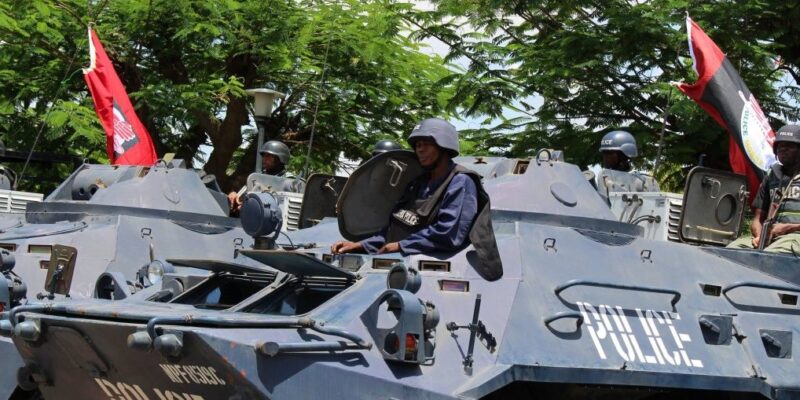 BY Charles Nwabardi
A combined team of security operatives fought hard on Thursday with a dare-devilish robbery gang who  besieged a bank (name withheld) in Otun Ekiti in Moba Local Government Area of Ekiti State with attempt to cart away cash but could not succeed.   A police officer however, lost his life in the process.
Police sources in the area said on the arrival of the gang who initially succeeded in breaking into the banking premises,  information had gone round, thereby prompting the swift arrival of police, military and local security outfits.
On noticing the arrival of the security team, the robbers made attempt to escape and gun duel ensued during which a police officer was shot.
Confirming the incident, the Police Public Relations Officer (PPRO) in Ekiti State, Sunday Abutu said the police officer was killed as a result of exchange of gun shots between the robbers and the combined team of the police, soldiers and the community vigilantes.
According to the PPRO, the robbery attack took place at about 5pm onThursday.
Giving details, he said “A  group of armed men stormed the Otun bank and initially succeeded in breaking the bank security door before their mission was thwarted by the swift arrival of a combined team of police, military, and local security outfits.”
He said that an attempt to escape by the criminal elements triggered a shootout which claimed the life of the officer while the robbers had to desperately escape via some routes on foot.
The police spokesman assured that the perpetrators of the crime would be tracked and arrested while calling  on Ekiti residents not to panic