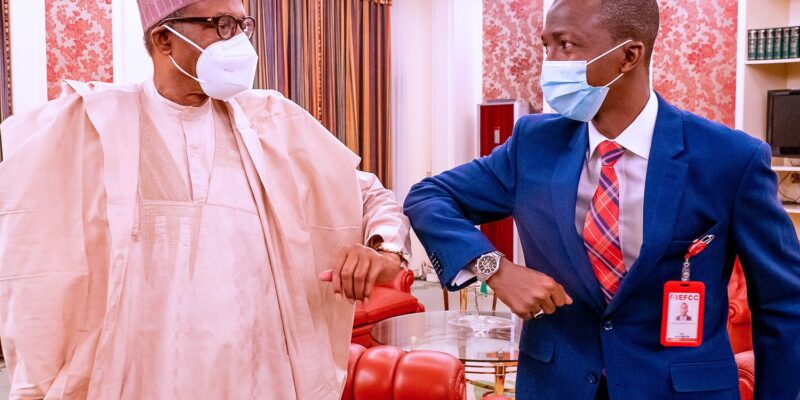 The Chairman of Economic and Financial Crimes Commission, Abdulrasheed Bawa, has been called upon to reveal the identities of the Federal Minister and the Bank Managing Director he claimed connived to launder the sum of $37.5m through a real estate deal or resign.

Bawa, had on Channels TV’s Sunrise Daily, on Tuesday, narrated how the EFCC investigated a female minister, whom he said, bought $37.5 million property from a bank and deposited $20 million in cash.

However, Bawa shielded the name of the minister

Reacting, Arewa youths under the aegis of the Northern Youth Council of Nigeria said the inability of the EFCC Chairman to name the individuals involved in the questionable deal was now causing a negative public perception of all female ministers in the Federal Executive Council.

They made the call  in a statement through the Publicity Secretary of the Council, Samuel Kure, made available in Abuja.

The statement said, “It is safe for right thinking Nigerians to conclude that the EFCC is through with its investigation of the matter. Sadly, the said Minister and the bank MD are yet to be docked in any court of competent jurisdiction.

“We noted this as a deliberate attempt to conceal the identity of the thieves of our commonwealth. If the EFCC can speedily parade suspected ‘yahoo’ boys and girls, why is the case of these unnamed characters treated differently?

“The inability to disclose their identities shows that some people are now more powerful than the EFCC, or that some powerful individuals planted the Commission’s Chairman into the system and are now tele-guiding him on who to parade or not”.

“Either way, this amounts to a betrayal of the trust of Nigerians and the President who appointed him to handle one of the focal points that led to the election of the APC in 2015 and its reelection in 2019.

“In the event that the EFCC feels he can’t name and shame the bank MD and the Minister involved, we call on him to humbly resign and leave the stage for a more serious and fearless  person to take over the wheel. Corruption must be killed, if our nation must survive.

“Until the identity of the minister is made public, Nigerians will continue to see every female minister serving in the present regime as an operator of a secret vault at home.

“So, to salvage the reputation of other Ministers that are selflessly working for the betterment of Nigeria, the EFCC should quickly let the cat out of the bag.”

However, the Council noted the concern raised by Bawa over threats to his life, and promised to provide him extra security even ‘human shields’ in all his public outings, if he would prioritise the interest of the people.

“We want to assure him that the Northern youths will stand with him and do everything to protect him, even if it means providing human shields for him in all his outings, provided he puts the interest of over 200 million Nigerians above the microscopic few that have access to our common patrimony,” the statement added.