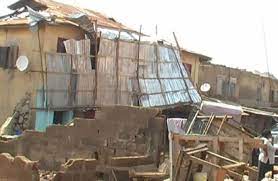 No fewer than 50 persons have lost their lives to rainstorm and wind-storm recorded in Jigawa State since the beginning of raining season till date.

According to Sani, the incident left thousands of houses destroyed and persons displaced in almost all the 27 local government areas of the state were affected.

According to him, “rainstorm leading to mostly building collapse have claimed the lives of about 50 persons.

“There was a very heavy rainfall for about three days. So almost all the local governments in the state were affected.

“Similarly, there was also wind-storm in Kafin Hausa Local Government of the state where 6 people died, 68 hospitalized and about 1,438 people lost their houses.

“The incidents were recorded since the beginning of the raining season till date,” Sani however said.