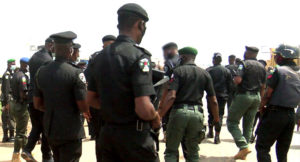 The Commissioner of Police in Lagos State, CP Hakeem Odumosu, has advised members of the public joining public buses to be more vigilant when joining commercial vehicles.

The Command’s Spokesperson, CSP Olumuyiwa Adejobi, reported in an interview with newsmen on Thursday.

Adejobi said “one chance” as it is popularly called in Lagos state is one of the crimes recorded, where passengers are robbed and pushed out of moving commercial vehicle.

“One chance operators can easily be tracked as long as we have the vehicle registration number. This is what made it possible for LASTMA officers to intercept a vehicle at Aja recently.

“All we just need is for people to be mindful of the buses they board. Be sure to assess the kind of people in the bus and don’t just enter because you are in haste to get to your destination.

“But we are mindful of the two incidents and their modus operandi. We have arrested many of the culprits and we will not relent,” he said.

To arrest the situation, Adejobi announced that CP Hakeem Odumosu has directed immediate deployment of additional 1,000 personnel to check traffic robbery in the state and gave motorcycles to policemen, which made it easier for them to maneuver and track traffic robbers.

“One chance as it is popularly called in Lagos state is one of the crimes we record, where passengers are robbed and pushed out of moving commercial vehicles, and the Command is mindful of this.

“This is why we have intensified our intelligence and are taking proactive measures to make sure the perpetrators are caught in their hideouts before they strike.

“What the CP has done again is to deploy additional 1,000 personnel to the traffic division of the state and they were given motorcycles to maneuver and keep traffic robbers in check,” Adejobi said.

Adejobi explained that traffic robbers usually operated on motorcycles or just trek to their victims in a hold up while one chance operators robbed passengers inside vehicles.