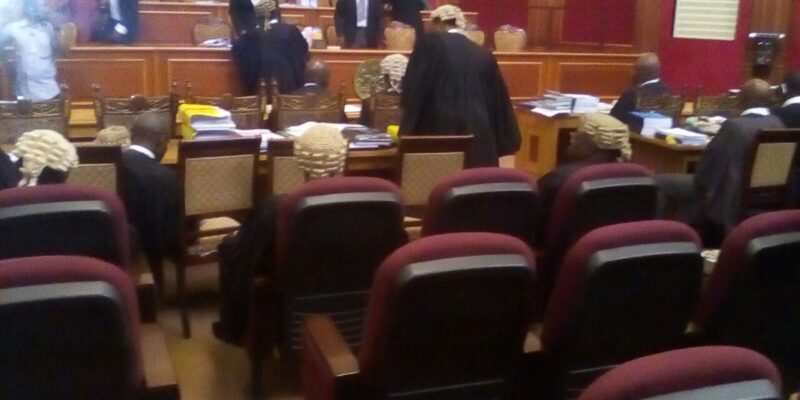 By Frank Oshanugor
If there is one area in policing where I normally hold officers and men of the Nigeria Police Force in high esteem, it has to do with their steadfastness (though not always 100%) in ensuring that suspects arrested by them for one crime or the other are not prosecuted based on the narratives in the press particularly social media.
Even though during parade of arrested crime suspects in front of news men by the police authorities, there are usually material or circumstantial evidence to show that a suspect has a case to answer in connection with the crime for which he or she is arrested, the police usually insist on charging the suspect to court with the contention that the suspect is innocent of the offence until proved otherwise in the court.
Though the police are statutorily charged with the prosecution of crime suspects in court after arrest, yet the same police still observe the rule of law by not being the prosecutor and judge at the same time.
It is obviously in this light, that the average police officer would always refer to an arrested person in police custody as a suspect. This is because referring to the person as a criminal amounts to taking the position of the judge by the police.
Regrettably, the press in Nigeria particularly in this era of the social media cannot be largely exonerated from trying to mislead the reading public with certain elements of trial of suspects in the media space even before police conclude their investigation and secure the advice of the Director of Public Prosecution (DPP) whether to proceed with trial on not.
Often times like what is currently playing out in the Chidinma Adaora Ojukwu’s case, there is already “trial” by some section of the social media condemning and passing judgement on the 21-year-old University of Lagos student simply based on the revelation so far.
As gruesome and condemnable  as the death of the Super TV boss, Michael Usifo Ataga allegedly in the hands of Ojukwu has been, it is still not enough for people writing or speaking through the media to take the position of a judge when police investigations are not concluded yet.
From records, we have had cases where some suspects arrested and paraded by the police attracted vicious verbal attack, curses and sentencing from members of the public through the media even before police completed their work, only for the suspect to be declared innocent by the court at the end of the trial.
I do not know how many Nigerians could remember the case of  one High Court Judge in the old Bendel State, Mr. Donald Ikomi who was accused  of killing and  using his security attachee Police Constable Uanlie Agbede for ritual.  This happened during military era when Lawrence Anini and his gang of armed robbers were terrorising Bendel State and Ikomi was serving both as a High Court Judge and Chairman of the Bendel State Robbery and Firearms Tribunal.
The moment news broke out that Ikomi was suspected to have connived his cook and his clerical officer living in his official quarters to kill Constable Agbede who was his official police security guard,  the media at that time joined in orchestrating the news with opinionated articles and editorial comments that tended to pass judgement on Ikomi even before his trial in the court.  Not a few Nigerians had believed what they were reading in the newspapers of that time.
Many had wished that Ikomi should just be killed without trial despite the man’s plea of innocence from the outset. The trial which began at the High Court  moved to Court of Appeal after the High Court had convicted him. The Court of Appeal upheld the ruling of the High Court but on further appeal to Supreme Court, the lower Courts’ judgements were quashed and Ikomi and
the two other co-accused  discharged and acquitted for lack of enough evidence to convict them.
As God would have it, after the trial had gone the full circle, police later clamped down on the Anini group members who during interrogation confessed that they killed Constable Agbede just to implicate Ikomi and put him in trouble for sentencing some of their members to death in his capacity as the Chairman of the Robbery and Firearms Tribunal. It was this confession that finally exonerated Ikomi and brought him to freedom in the minds of those who earlier adjudged guilty.
He subsequently retired from the judiciary.
There have been some other similar incidents like the Ikomi case where media trials had not helped matters.  It was obviously due to this, that members of the Nigerian Bar Association (NBA) in Lagos at a time kicked against the parade of criminal suspects before Reporters’ television cameras by the police when such suspects are still presumed innocent.
As we are fast moving far into the 21st Century with its complexities, I hasten to suggest that those of us in the media should be circumspect on issues of criminal suspects.  Let us not opinionate in a subjective manner that would easily lead members of the public to conclude that a particular suspect is guilty of an offence for which he has not even be charged.
We should not go ahead of the police who have the responsibility of prosecuting the suspects in court where the suspect’s culpability or otherwise is to be determined.