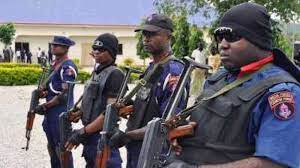 The Commandant-General, Nigeria Security and Civil Defense Corps (NSCDC), Dr Ahmed Audi, has revealed that the Corps has upgraded its Standard Operating Procedure and Code of Conduct to further provides adequate mechanisms of handling disciplinary cases.

Audi made the disclosure when he featured on the News Agency of Nigeria (NAN) Forum in Abuja.

“We have approved that we will carry out discrete intelligence and investigation on the role of our personnel that are allegedly involved in oil theft.

“I will like to assure Nigerians that as soon as we are through with the investigations, anybody that is found culpable will be severely sanctioned.

“To also add to that, what we did recently was to disband and reorganise the Anti-Vandalism Unit with the view to injecting fresh blood.

“So, what we did was that anybody who has served in the Niger Delta region for more than six months to one year is leaving that place and we will now bring new people.

“Let me also reiterate that as soon as we conclude investigations, we will try to make it public to Nigerians.

“Anybody no matter how highly placed, no matter his level or rank that is involved in colluding or conniving or in some form of compromise with oil thieves would be severely sanctioned,” Audi added.

Recall, the corps had been investigating reports of alleged collusion between some of its personnel and oil thieves in the Niger Delta.

Shedding light on possibility of Nigerians bearing arms, Dr Ahmed Audi, said, “I strongly disapprove of it. Even now, when there is no law in existence, you still have a proliferation of small arms and light weapons in the hands of people.

“It has to do with civilization and education. Even in Europe and America, where they have that law where virtually everybody who can drive can have arms, they are trying to control it now because of how some events unfold.

“In the world, especially in Europe and America, somebody will just wake up and just go to a school and open fire on kids. You know that is madness.

“And so for me, I don’t think we are there yet to allow citizens to carry arms.”