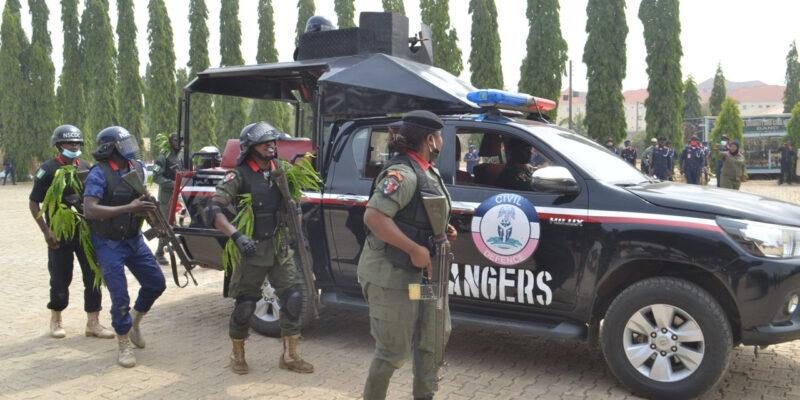 The Nigeria Security and Civil Defence Corps NSCDC has unveiled an all-female combatant squad with their deployment to schools in the Federal Capital Territory FCT and Katsina states to confront kidnapping and banditry activities among others within and around Schools environment.

Commandant General of the NSCDC, Dr Ahmed Abubakar Audi disclosed this on Monday during a special parade, simulation exercise and unveiling of the squad at the NSCDC Headquarters parade ground in Abuja.

Audi ordered them to take on criminals without hesitation,

He recalled how he was propelled to hasten efforts to build a credible and proactive security organization that is knowledge-driven, dogged and committed to its responsibility when he assumed office.

According tohim, he established the new squad due to the unprovoked and mindless attacks on Nigerians which has led to loss of lives and left in its trail gory images.

“That driving force and initiative brought about the establishment of the first set of female squad. This is in keeping to my belief that women can make and have been making valuable contributions to nation building.

“Exactly 20 days ago, l was at our training college in Katsina to herald the birth of our child of necessity. It was a colourful and red letter moment as we witnessed the colourful and wonderful passing out parade of our newly conceived and successfully midwifed Civil Defence Female Squad.

“The quest for security stability in our country continues to remain a holy grail with a ceaseless and unabated cases of banditry, kidnapping, armed robbery, insurgency, terrorism among others. All these have continued to threaten our country’s cohesion, stability and territorial integrity.

“The Civil Defence Female Squad will definitely complement the efforts of their male counterparts and also work together with sister agencies.

“As we gather again today, I urge you to comply strictly with the rules of engagement based on universal best practices in any security operation you may be involved in either within or outside the nation. Officers and Men are also availed training opportunities in the course of their career to enhance their capacity to contribute to the Corps and nation at large.

“These deliberate efforts have re-vitalized, rejuvenated, re-energized and remodified the Corps to world class standard for effective service delivery and professionalism.

“With the recent Government proposed Safe School Initiative, the Corps made bold to express readiness to confront kidnapping and banditry activities among others within and around Schools environment.

“Therefore, I invite all the stakeholders in the sector to join hands with us in proactively implementing measures and undertaking actions that will ultimately neutralize any form of aggression and provide assurance of public safety”, Audi stated.