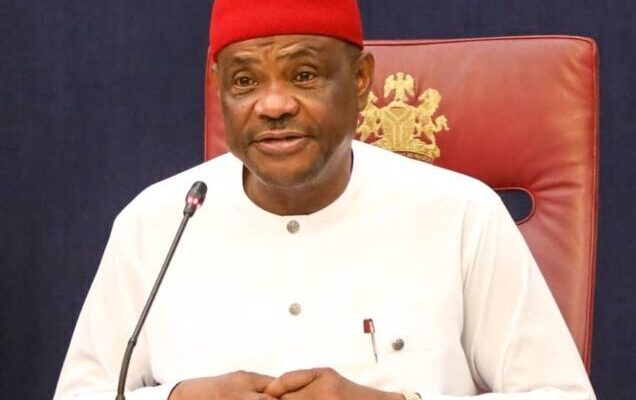 Rivers State Governor Nyesom Wike has been accused  of conspiring with President Muhammadu Buhari to kill over 3,800 Biafrans.

A United States-based lawyer of detained leader of the Indigenous People of Biafra (IPOB), Nnamdi Kanu, made the accusation in a criminal complaint filed before the International Criminal Court, in The Hague.

The lawyer, Bruce Fein, in his petition to Karim Khan, Chief Prosecutor of the International Criminal Court, said Wike is guilty of genocide and crimes against humanity as defined in Articles 6 and 7 of the Rome Statute by complicity in an ongoing scheme to destroy or persecute Biafrans in Nigeria.

“The accused EZENWO NYESOM WIKE has lent his authority as Governor of Rivers State to assist in genocide and crimes against humanity is elaborated anon.

“Among other things, WIKE orchestrated the massacre of more than 3800 Biafrans in the Obigbo area of Rivers State in October 2020 as part of an ongoing and widespread and systematic attack by the Fulani- controlled Federal Government of Nigeria, against the Biafran civilian population in the southeast,” part of the petition read.

“The magnitude of Fulani atrocities against Biafrans shocks the conscience. WIKE is a prime mover full knowledge of the notorious genocide and crimes against humanity engineered by co-conspirator President Muhammadu Buhari.

“The Biafran genocide escalated with the presidential election of former military dictator and Fulani extremist Muhammadu Buhari in 2015. President Buhari unwittingly blurted out at the United States Institute of Peace on July 25, 2015, that he would represent the interests of the constituencies that voted 97 percent to support him but not his political opponents. Mr. Buhari has more than amply honored his threat by a genocide campaign implicating the accused GOVERNOR WIKE.

“The security forces also abducted and disappeared till date in the same past 14 months at least 1000 unarmed civilians; arrested alive and unarmed and taken into security custodies outside the knowledge of their families or lawyers, from where they have gone missing till date.

“Soldiers of the Nigerian Army are found to be responsible for at least 70% of their abduction and disappearances while DSS, NPF, Nigerian Navy and Nigerian Air Force are separately and jointly responsible for the remaining 30%.

“In the area of ‘perpetrator ratio’, soldiers of the Nigerian Army and various ‘special squads’ of the Nigeria Police Force are the lead-killers or perpetrators. The trio of Governors Hope Uzodimma of Imo State, Nyesom Wike of Rivers State and Dave Umahi of Ebonyi State are the most vicariously culpable Governors that aided and abetted the killings and property destruction including burning of civilian homes and sanctuaries.

“On the other hand, the widely believed Nigerian State protected Jihadists especially the Jihadist Fulani Herdsmen are responsible for hacking to death in 2021 alone of at least 270 Igbo Christians. Their death had majorly occurred in Ebonyi, Enugu, Anambra, Imo, Abia and Igbo parts of Delta, Edo (Obiaruku and Igbo-Akiri), Benue and Kogi States.

“The killings by Jihadist Fulani Herdsmen have brought the total number of defenseless citizens traceably killed in Eastern Nigeria in the past 14 months to at least 1,400. This is when added to 1,150 defenseless civilian deaths perpetrated by security forces. The Death Toll Could Be 2,400 If 1000 Missing/Presumed Dead Citizens are added. It is therefore likely correct to say that in all, not less than 2,400 unarmed civilians lost their lives to Nigerian security forces and the Jihadists in Eastern Nigeria in the past 14 months-covering October 2020 to December 2021.

“This is on account of the fact that the not less than 1000 missing persons are likely to have been killed in custodies and most unlikely to be returned alive to their families again. This is more so when strong evidence abounds showing no traces of location and securing the release of citizens abducted by soldiers of the Nigerian Army in Eastern Nigeria since January 2021.

“4800 Arrested, 2000 Still Held, 700 Freed, Others Killed Or Disappeared Analytically, estimated 4800 unarmed citizens of Eastern Nigeria have been arrested or abducted by security forces in the past 14 months (since late October 2020), out of the number, 660 were traceably killed in security custodies, about 500 were killed in open shootings mainly carried out by soldiers of the Nigerian Army and personnel of other branches of the Armed Forces-with a clear case in point being dumping of over 100 dead victims of Army’s open shooting of civilians at the Owerri Federal Medical Center.