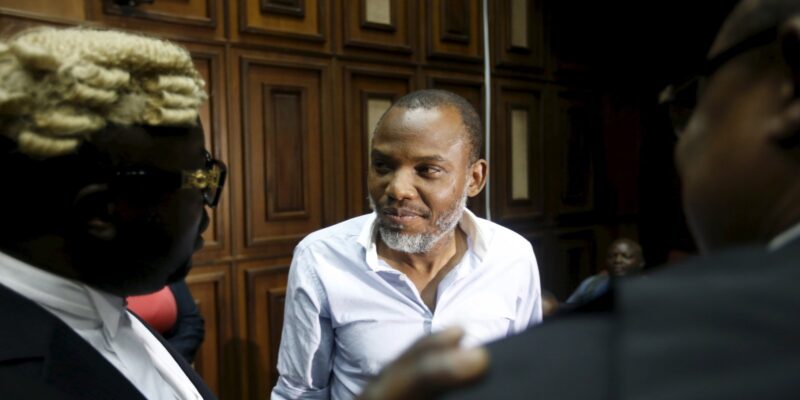 A member of Kanu’s legal team, Aloy Ejimakor, has called on the British High Commission in Nigeria to banish every red tape and exert the full weight of its diplomatic clout in gaining immediate access to Kanu.

The call was consequent upon the stand of the Department of State Services allegedly stopping detained leader of the proscribed Indigenous People of Biafra, Nnamdi Kanu, from signing a consular assistance form by the United Kingdom.

In a statement on Monday, the lawyer said the two forms delivered to the IPOB leader last Wednesday during a visit to the office of the secret police were returned to him unsigned.

Ejimakor’s statement was titled, ‘Summary of my visitation with our Client, Mazi Nnamdi Kanu on Monday 19th July’.

It read, “Last Saturday, when I visited Mazi Kanu, I expressed strong concerns about the inordinate delay in having Kanu sign the two Forms I had taken to the DSS for Kanu’s signature some days before.

“Both Forms relate to affirming his consent to consular and diplomatic interventions by the United Kingdom and her High Commission in Nigeria.

“Surprisingly, the Forms were returned to me unsigned.

“Let me make it clear that the day I took the Forms to the DSS, the officers on location were amenable to Kanu signing them until somewhere along the line, they tarried and decided to send it to the legal unit for vetting.

“So, my sense is that it’s the legal unit of the DSS that disapproved of Kanu signing the Forms for reasons that were not given to me.

“As a lawyer, I don’t see any legal advantage the government of Nigeria stands to gain by blocking Kanu from signing those Forms. The Forms are but a mere routine in matters like this.

“Instead of any advantage, the refusal will help fuel the notion that the government of Nigeria is deliberately isolating Kanu from having consular and diplomatic access to the United Kingdom.

“It does not comport with the best traditions of fundamental fairness that a detainee is being denied access to resources that will assist him in his defence. This is one of the things that will count in our reckoning as this matter continues to fold.

“For these reasons, I am now compelled to call on the British High Commission in Nigeria to banish every red tape and exert the full weight of its diplomatic clout in gaining immediate access to Kanu. This is especially important, given the prospects of better welfare, including adequate medical care for Mazi Kanu.

“Further, the prompt intervention of the High Commission will mean that Kanu will have another layer of human contact in addition to his legal team who are the only ones currently allowed to see him.”

Kanu, who was born on September 25, 1967, is a holder of Nigerian and British passports. Upon his re-arrest and extradition from a foreign country, he was arraigned before Justice Binta Nyako of the Federal High Court in Abuja for terrorism-related charges and has since been remanded in the custody of the Department of State Services. He had jumped bail before fleeing to the United Kingdom.

Recall that the British Government had expressed readiness to provide “consular assistance” for Kanu but needs him to assent to the assistance by signing some forms.

“With regard to any questions about whether the British High Commission are providing assistance in this case, we can confirm that the Foreign, Commonwealth and Development Office stands ready to provide consular assistance.”