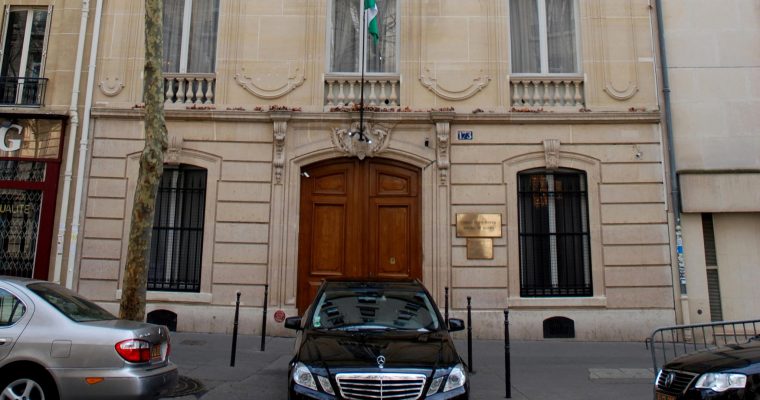 Allegations of extortion made yesterday by a Twitter user, @henryabebe, that some staff of the Nigerian Embassy in Paris, France “use the fingerprint clearance form to extort Nigerians at the Paris embassy at the price of 125euro”, has been denied.

The Nigerian Embassy in Paris, France has denied allegations that it treats Nigerians with disdain and also extorts money from them.

The Twitter userAlerting authorities in Nigeria of the other forms of extortion allegedly going on at the embassy, said, “We cannot expect that Nigerians receive respect from the host country while the representative (embassy) of the country treats people with disdain.”

In a statement titled, ‘Press Release By The Embassy Of Nigeria In Paris On The Spurious Allegations Of @Henryabebe’, the embassy refuted the allegations, saying they came from someone “clearly not familiar with the services rendered by the Embassy and has not been following the regular public notices updated on the website of the Mission, and public areas at the Chancery.

“Such notices are also regularly transmitted to Nigerian community associations in France, as part of the outreach efforts of the Embassy.”

“We wish to state that all the staff of Nigerian Embassy in Paris exhibit the highest levels of professionalism and respect in delivering services to Nigerians. @henryabebe, in his tweet, indicated that Embassy officials were treating Nigerians with disrespect and were charging thirty euros (€30) as an administrative fee, sixty euros (€60) for legalization, and two hundred and fifty euros (€250) for express service.

“Contrary to @henryabebe’s allegations, the Nigerian Embassy France, has been at the forefront of delivering efficient and timely consular and immigration services with the highest levels of professionalism.

“It is pertinent to highlight that due to the efficiency and professionalism of the Nigerian Embassy in Paris, Nigerians from various countries in Europe travel to Paris to apply for their passports, with a same-day collection policy.

“Nigerians in France and across Europe, who are familiar with the high quality of the services of the Embassy in Paris, will attest to the transparency, efficiency, professionalism and courteousness of our officers and staff in dealing with applicants for passports, visas and other consular services.

“Furthermore, the Mission has a feedback mechanism for dealing promptly with genuine urgent passport and consular cases, as well as complaints from unsatisfied applicants.

“As part of the efforts to enhance service delivery, the Embassy in the month of February and March 2021 organized training and retraining courses on professionalism and service delivery for its staff. The Embassy also introduced measures to enable applicants for consular services to book appointments online to ensure crowd control and promote transparency.

“Regrettably, many of our nationals refused to adhere to the online appointment policy.

“It is pertinent to note that 24 May 2021, the day preceding the day @henryabebe presented at the Embassy, was Ascension Day, which was a public holiday in France.

“Consequently, the following day, 26 May 2021, witnessed all the people who had missed their appointments due to the public holiday of 24 May 2021 and many others without appointments, trooping into the Embassy.

“The Embassy staff assured our nationals that they would be attended to.

“However, due to the limited sitting space inside the Chancery resulting from Covid-19 restrictions, some of them were advised to stay in the queue at the entrance of the Chancery.

“Unfortunately, arguments ensued and the security staff explained the situation to our nationals, who failed to exercise patience. Some of them threatened to burn down the Embassy and attack the officials.”

“All the charges are clearly stated on the Embassy’s website and displayed conspicuously at the Embassy.

“Meanwhile, despite the reintroduction of the fees, the Embassy has in recent months halted payment for express service to enable a faster clear up of all pending applications.”