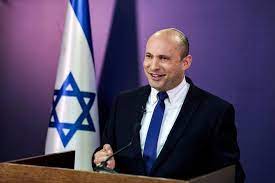 Minutes after meeting Bennett, Netanyahu repeated a pledge to topple the new government approved on Sunday by a 60-59 vote in parliament.

“It will happen sooner than you think,” Netanyahu, 71, who spent a record 12 straight years in office, said in public remarks to legislators of his right-wing Likud party.

Formation of the alliance of right-wing, centrist, left-wing and Arab parties, with little in common other than a desire to unseat Netanyahu, capped coalition-building efforts after a March 23 election, Israel’s fourth poll in two years.

Instead of the traditional toasts marking Bennett’s entry into the prime minister’s office, Netanyahu held a low-key meeting there with the former defence chief, who heads the nationalist Yamina party, to brief him on government business.

The government was already facing a sensitive decision over whether to approve a flag-waving procession planned for Tuesday by Jewish nationalists through the Muslim quarter of Jerusalem’s Old City.