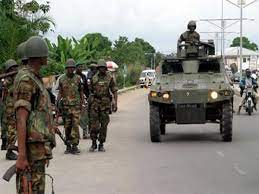 Scores of Boko Haram gunmen launched attack from the rear of Nigerian Air Force base in Kaduna early Saturday morning in an attempt  to seize the base.

Eyewitnesses told journalists that shooting between the terrorists and military personnel lasted for about two hours up till 6am when the invaders beat a retreat.

It is believed that the attack, coming the same week in which bandits invaded the military barracks of the Armed Forces Command and Staff College, Jaji, Kaduna State, and left with about 200 heads of cattle, marks an attempt by the terrorists to embarrass the troops.

An expert said it could also be Boko Haram’s strategy to destabilise the Air Force personnel whose air campaigns strengthened the hand of the ground troops to do much damage to the renegades’ supply line.

No casualty figures have been given on either side; neither has the military command officially acknowledged the reports