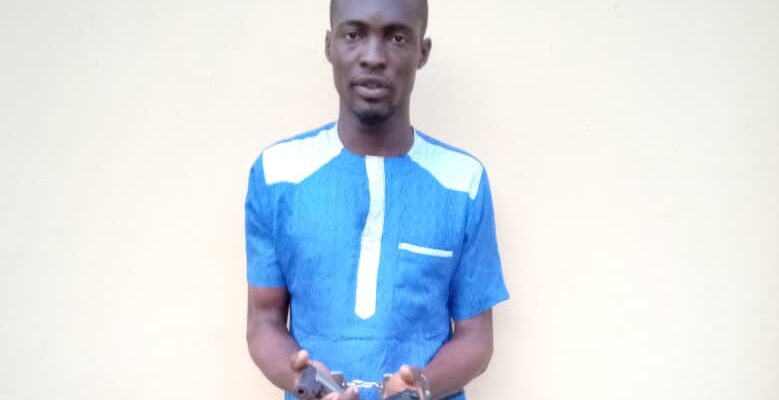 By Braxton Ilobah
Police Operatives attached to Denton Division of the Lagos State Police Command, on Monday arrested one Omotayo Olaiya for reportedly  threatening to kill  Mrs. Olatunji Shakirat Mayo with a gun inside the Ansarudeen Mosque, located at No. 72-74, Bola Street, Ebute-Metta Lagos.
SECURITY REPORTERS.com gathered that the arrest was made on the strength of the complaint lodged by Mayo based upon which, a Surveillance Team was detailed to track down the suspect and he was eventually arrested.
Speaking on the incident, Lagos State Police spokesman CSP Olumuyiwa Adejobi said that  a Brownie Pistol and one Motorola walkie-talkie were recovered from the suspect.
“Upon interrogation, the suspect confessed that he bought the pistol from one Taiwo, residing at Ikorodun Area of Lagos State in November, 2020, at the rate of Eighty Thousand naira (#80,000).”
He added that the Commissioner of Police, Lagos State, Hakeem Odumosu, has ordered that the case be transferred to the Command’s Special Squad, Ikeja, for proper investigation and arrest of other culprits in connection with the case of unlawful possession of firearms and threat to life of the complainant.
In another development, police men attached to Festac Division of the Command, have rescued an abandoned baby girl, of about 6month old, on Tuesday at 24B, Plot 3006, Rafiu Babatunde Tinubu Street, Amuwo Odofin, Lagos State.
Adejobi said the Police in conjuction with  Social Workers from Amuwo Odofin Local Government Area of Lagos State have taken care of the rescued baby and she has been taken to the Juvenile and Women Centre (JWC) Alakara for further action.
He added that CP  Odumosu, has condemned the cruel and inhuman act of abandoning babies, on the road or in the bush, that,  stressing that such heinous act is criminal and would not be tolerated in the state