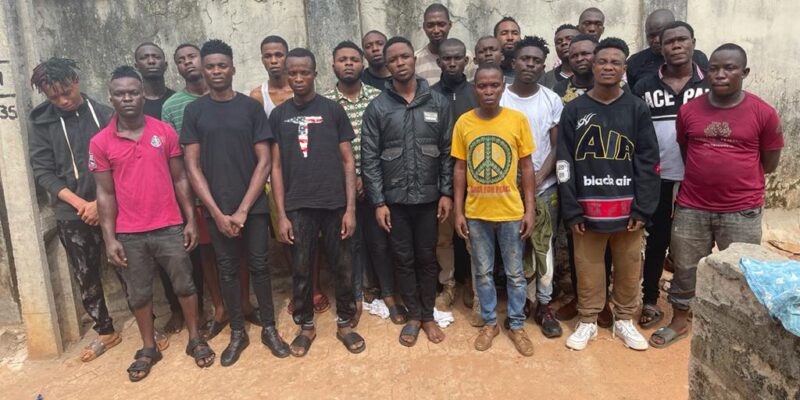 By Charles Nwabardi
Operatives of Delta State Police Special Anti-Cultism Unit (SACU) led my Christopher Igbaji, a Superintendent of Police (SP) at the weekend arrested some armed members of Ubulu-Unor Vigilante Group for keeping watch and aiding 40 suspected male cultists who had assembled for initiation.
SECURITY REPORTERS.com investigation revealed that the police operatives had relied on intelligence report gathered over a period of time concerning activities of cult groups in the area.  Information got to SACU that one of the groups Aye Confraternity was planning to carry out initiation of new members at Ubulu-Unor bush in Aniocha South Local Government Area of Delta State. 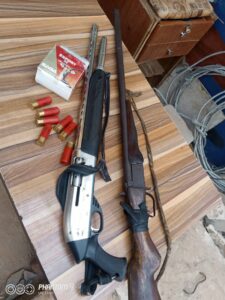 When the operatives got to the venue of the initiation, some armed men who claimed to be Ubulu-Unor Vigilante members were seen keeping watch and aiding the suspected cultists to carry their initiation.  They were promptly arrested.
Confirming the incident, Delta State Police spokesman, DSP Bright Edafe said exhibits recovered from the suspects included a Revolver pistol with eleven live ammunition, one locally made single barrel gun, one pump action, eight vehicles and one Mitsubishi pick up with the inscription of Ubulu-Unor Vigilante.
According to him, the case is under investigation while the State Police Commissioner Ari Mohammed Ali has urged all officers and men in the state to keep the tempo as his administration is determined to Delta State crime free.
The commissioner has also advised members of the public, vigilante groups and other groups to resist the urge to be used by miscreants to fulfill their evil motives.
He urged members of the public to always give timely report to the police to aid the arrest of criminals in their midst and bring peace and security to the State.
In another development, Delta State Police personnel have rescued a Kidnapped victim and arrested suspected member of the kidnap gang in Sapele area of the State. 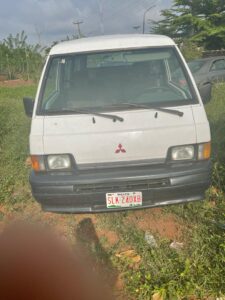 Information gathered revealed that one Ejiro John about 25 years old of Ogbori Community in Warri  had led a group of armed men some of whom wore military uniforms with gun and other weapons to abduct one Peter Okologo after firing gun shots to scare people including Okologo’s girl friend (name withheld).
The victim Peter Okologo was later found in Sapele by the police through information linking one Kingsley Omagbemi and one David Isaac Mojo who reportedly held him hostage and demanded a ransom of N1million.
Police spokesman said Mojo was arrested as he attempted to collect the said ransom while a member of the gang identified simply as Alason escaped with a black Toyota Camry car.
The kidnapped victim was eventually rescued by the police.  Suspects are in custody while investigation was going on as at press time.