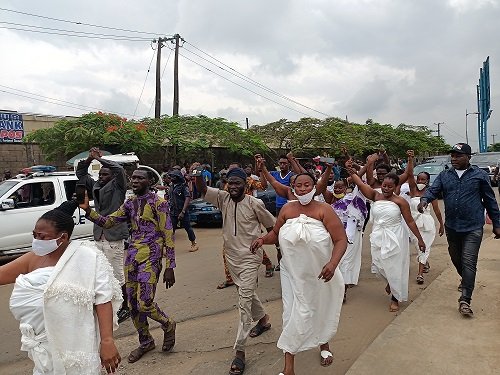 Agitators of Yoruba Nation on Saturday July 3, 2021, lived up to their words as they trooped out in their numbers to pass their messages across despite the heavy presence of armed policemen and soldiers around the Gani Fawehinmi Park, Ojota, Lagos.

The agitators surfaced around 11.20 am while the Commissioner of Police, Hakeem Odumosu, was addressing journalists.

Some of the agitators who spoke to Security reporters.com, said it was time to have a separate nation for the Yoruba ethnic group because they  are fed up with the unfair treatment and injustice in the country.

In all these, the self-proclaimed activist and one of the foremost vanguards of the Yoruba Nation agitation, Chief Sunday Adeyemo, popularly known as “Sunday Igboho” was not in sight.

However, women clad in white attire believed to be traditionalists also put up a show at the rally in Ojota, Lagos.

The women in their numbers, stopped in front of a police vehicle for few seconds before marching ahead singing unity songs as they marched on.

Regrettably, a yoghurt seller, identified simply as Jumoke, has been killed by bullets reportedly fired by a security operative dispersing Yoruba Nation agitators at Ojota, Lagos State while displaying wares.

SecurityReporters.com, sighted the girl’s corpse and observed the body had been covered with a piece of cloth as a crowd gathered at the spot.

Meanwhile, the Lagos State Police Command has issued an official  statement debunking the claim that the 14-year-old girl was killed by a stray bullet during the Oodua Republic mega rally in Ojota, Lagos, Southwest Nigeria.

Police Public Relations Officer, PPRO, Muyiwa Adejobi on Saturday said,  “The Command hereby wishes to debunk the rumour and state categorically that it’s a calculated attempt to create confusion and fears in the minds of the good people of Lagos State and the country at large.

“The Command did not fire a single live bullet at Ojota rally today(Saturday). The said corpse was found wrapped and abandoned at a distance, far from Ojota venue of the rally, behind MRS Filling Station, inward Maryland, on the other side of the venue, with dried blood stains suggesting that the corpse is not fresh.

“After a close look at the corpse, a wound suspectedly sustained from a sharp object was seen on it. The news is false and mischievous. The Command therefore urges the general public to disregard the news and go about their lawful normal daily activities while investigation to unravel the incident will commence immediately.

“The Commissioner of Police, Lagos State, CP Hakeem Odumosu, therefore commiserates with the family of the found deceased and assures that thorough investigation will be carried out.

“The Command equally wishes to warn against the spread or peddling of fake and unconfirmed stories as such could be dangerous and counterproductive,” he said.