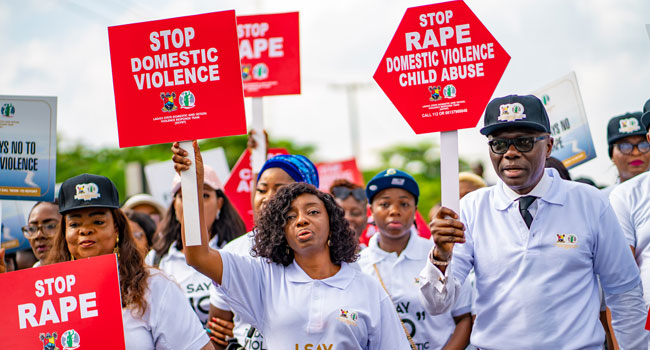 By Frank Oshanugor
The Lagos State Government has again warned against any form of domestic or sexual violence in the state just as it is committed in increasing offenders’ responsibility,  ensuring justice and protection for survivors.
Giving an update on Wednesday in a statement on a matter involving a couple Mr. Biola Idris and his wife, the Lagos State Domestic and Sexual Violence Response Team said  the case had been charged to Ita-Elewa Magistrate Court, Ikorodu on 25th June, 2021.
According to the statement, the Lagos State Police Command had arrested Biola Idris who reportedly assaulted his wife physically earlier in June, 2021.
“This act contravenes the Protection Against Domestic Violence Law as well as the Criminal Law of Lagos State, 2015.”
“According to the Lagos State Domestic and Sexual Violence Response Team, on the 16th of June, 2021, the survivor reported that her husband of 17 years locked her up in the factory they jointly own, and proceeded to physically assault her. She sustained grievous injuries in the process and was fearful for her life. She was immediately referred for medical attention and the Team assisted her in preserving the evidence of the assault.
“She disclosed that this was not the first time her husband would physically, emotionally, verbally and economically abuse her.”
The Response Team subsequently referred the case to Owutu Police Station Ikorodu for investigation  and the case was eventually charged to Ita-Elewa Magistrate Court Ikorodu on the 25th of June, 2021.
The victim Mrs. Idris was in turn  referred to receive psycho-social support to assist her towards healing.