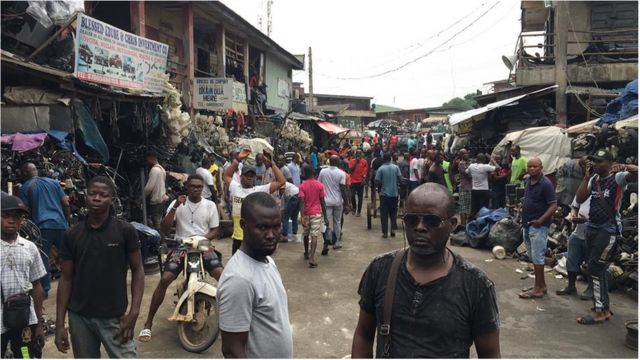 Violent clash was witnessed between a team of Air Force personnel attached to one of the security squads known as OP MESA and Ladipo International Market traders in Mushin area of Lagos.

During the sporadic gunshots, one person died while doctors at the Lagos University Teaching Hospital, LUTH, were still battling to save the life of three others.

Scores of traders sustained varying degrees of injuries while their vehicles were riddled with bullets.

There were different accounts as to how the trouble started. A version of the account said a man who was clad in a white shirt on a tracksuit went to the Aguiyi Ironsi International Market Traders Association Task Force wing, at about 11 am, demanding to see the chairman.

The visitor, who was said to have refused to state the reason for his visit, was taken to the Public Complaint Committee head, who thereafter, took him to the association’s chairman, Mr Emmanuel Mbamara, who at that time was with some persons.

Eyewitnesses said Mbamara gave the visitor audience but interrupted him halfway, explaining that his case needed proper attention. He was said to have told the visitor to sit down, while he concluded with others who were in his office earlier.

But the visitor reportedly picked offence, insisting that he should be attended to and that led to verbal confrontation as the visitor was alleged to have used unprintable words on Mbamara.

Some traders suspected to be members of the task force were said to have pushed the visitor out of the office, in the process of which a fight broke out and he, visitor, was overpowered.

The visitor reportedly left, disclosing that he was a soldier. He later returned with an armed team of military personnel in an OP MESSA Hilux van.

Another version of the account had it that a soldier with the Nigerian Army accompanied his civilian friend, who had a problem with the engine he earlier bought from one of the traders to the market. An altercation over the trader’s refusal to change the engine ensued.

It degenerated into a fight, during which the military man said to be in mufti and his civilian friend were overpowered. The civilian friend was said to have managed to wriggle himself from the traders’ grip and went out to alert the Air Force personnel on patrol of an attack on a soldier.

A third version of the account said trouble started following an argument between a trader and a customer over the trader’s refusal to give the customer another key starter in replacement of a faulty one he earlier bought.

However, a fourth report said the customer brought an engine he bought earlier from a trader at the market because it was faulty. The trader was said to have argued that the guaranteed date on the receipt of purchase had expired, thereby refusing to change it as requested by the customer.

It was learnt that immediately the Hilux van arrived at the section of the market, the military personnel jumped out of the van and made straight for the Task Force stand to effect the arrest of a man whom the aggrieved customer pointed to as one of those that attacked him.

However, the attempt was resisted by traders, who wriggled the man out of the Air Force personnel’s grip.

One of the traders, who spoke on condition of anonymity, said: “None of them (Air Force personnel) wore name tags. They fired directly at traders. One of the traders was shot in the stomach. Several persons sustained injuries in their bid to avoid being hit by bullets.

“When we realised that one of the traders was killed by bullets from the OP MESSA men, we blocked the way, preventing them from leaving because we were not sure if they were there legally and if they were genuine military personnel.

“As that was on, two other Hilux vans drove in and continued another round of shooting. Many traders were shot. The shooting spree lasted about an hour. While that was on, the chairman and other leaders of the market contacted the Army authorities and Commissioner of Police.”

One of the traders whose life was snuffed out by bullets was identified simply as Scatter. His corpse was deposited at the Isolo General Hospital mortuary.

Doctors at LUTH were still battling to save the lives of three other traders whose identities were given as Ifeanyin Eyin, Makwo Epuna and Chidinmma Okechukwu.

Eyin was said to be escaping from the scene when a bullet hit him at the back. Epuna was shot in the buttocks while Okechukwu, who was on oxygen at the hospital, was about to be rolled into the theatre for surgery at 4 pm.

The Director, Public Relations, Nigerian Air Force, Air Commodore Edward Gabkwet, when contacted, said the team that went to the market had been taken to the Logistics Command of the Nigerian Air Force for interrogation.

He said: “We were told that an Army personnel and a civilian friend of his went to Ladipo market to confront someone that was alleged to be owing the Army personnel. While at the market, an argument ensued leading to an exchange of blows.

“The Army personnel were subdued, the civilians ran out to look for assistance. He saw some Air Force personnel on patrol. He beckoned on them that a soldier was under attack

“The Nigerian Air Force personnel that were in that market did not really kill anybody. The  soldier who  took the rifle that was snatched from OP MESSA opened fire in self-defence.

“Our Base Commander was able to calm the situation. He visited the scene. Those involved have been arrested and are under investigation. We heard only one person was shot. An investigation is, however, ongoing.”

Meanwhile, hoodlums hijacked the situation to attack motorists on both sides of the ever-busy Oshodi/Apapa Expressway, at the Toyota bus stop. The attack was said to be a protest of the killing of traders by the military.

They shattered defenceless motorists’ windscreens, dispossessing them of phones, cash and other valuables. Some of those attacked were traders and workers who were returning from their respective business places.