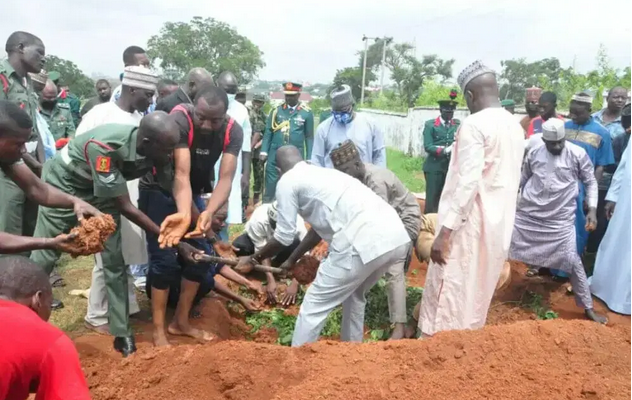 The late Major General Hussaini Ahmed, former Provost Marshal, who was killed on Thursday by gunmen suspected to be bandits along the Lokoja -Abuja road, was on Friday buried by the Nigerian Army.

General Ahmed was buried with full military honours at a ceremony at the Guards Brigade cemetery after Islamic rites with the Chief of Defence Staff, General Lucky Irabor leading the Chief of Army Staff, Lt. Gen Farouk Yahaya and other senior officers from across the Defence and services headquarters to pay their last respects.

A 21 gun salute and a minute silence as well as the presentation of the National Flag to his wife, Mrs Talatu Abdusalam Adaji and Islamic prayers by Brigadier General Shehu Mustapha, Director Islamic Affairs, were part of the highlights of the burial ceremony.

In his remarks, Chief of Army Staff, Lt. Gen Yahaya described the late senior officer as an articulate, dedicated, loyal and highly professional officer in the discharge of his duties.

He eulogized the senior officer for his sterling qualities and immeasurable contributions to the Nigerian Army while he was alive.

The COAS added, “It is indeed a very sad and shocking incident considering the circumstances and when it happened but we cannot question God. We all will get there one day but we don’t know how or when.

“As is mentioned in the holy books, the Bible and Quran, it is only God who knows when or where. Where you are rich or poor, mechanic or big man, human beings do not know tomorrow, only God knows. Ahmed has gone because it is his time. We will all get there when it is our time. We owe it a duty to take care of his family”.

Late Major General Ahmed was born on 16 February 1968 in Maiduguri and hailed from Maiduguri LGA of Borno state. He gained admission into the Nigerian Defence Academy in 1988 and was granted Regular Combatant Commission on 25 September 1993 as a member of 40 Regular Course at the rank of Lieutenant.

He was of the Nigerian Army Corp of Military Police and rose to the rank of Major General on 10 September 2020 before his demise on 15 July 2021.

An oration read by the Chief of Policy and Plans, Major General Anthony Omozojie said, “Major General Hussaini Ahmed was a calm, firm but fair officer with a good sense of purpose and responsibility. He was a forthright gentleman and a professional military police officer who was genuinely committed to his duties. He had remarkable conduct an overwhelming moral standard.”

Responding to a question on what the Nigerian Army would do about the assassination of late Major-Gen Ahmed and abduction of his sister, former Director, Army Public Relations, Brigadier General SK Usman (rtd) said, “So it is not just about the Nigerian Army or the Armed Forces, but it is about the nation. And I can tell you, no stone will be left unturned for those who had hand in his murder. The killers would be tracked, arrested and brought to justice. Because Ahmed is anybody you could have wished for a brother, husband, father or a Friend.

Asked to describe the late senior officer, Usman said, “It is very difficult in just a sentence or two to describe his personality. He was a complete gentle officer, somebody very reliable, very honest and straightforward, very calm and professional. I am yet to see anybody that had the course to exchange words or argue with Ahmed. It is not as if he doesn’t ague. I have seen him not just during a lively period; we were together at the heat and the fight against terrorism and insurgencies.