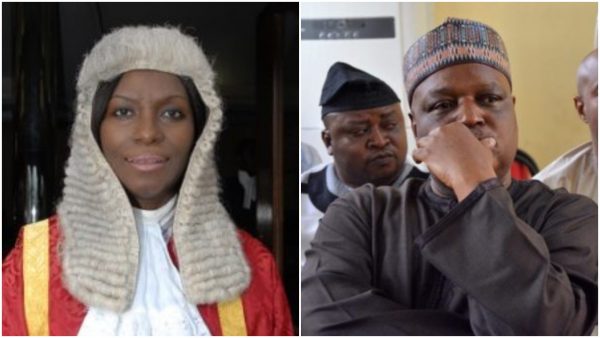 By Nkasi Kolie
Chief Justice of Nigeria (CJN), Ibrahim Muhammad will on Monday (today), swear-in 18 judges whose elevation to the Court of Appeal has been approved.
Among them is Justice Adebukola Banjoko of High Court of the Federal Capital Territory (FCT),  Abuja, who sentenced two former governors, Jolly Nyame of Taraba State and Joshua Dariye of Plateau State.
While Nyame was, on May 30, 2018, sentenced to a maximum of 14 years without an option of fine, his Plateau State counterpart, Dariye was, on June 12, 2018, sentenced him to 14 years imprisonment on charges of criminal breach of trust and two-years jail term for criminal misappropriation.
Also to be sworn in as a Justice of the Court of Appeal, are two former Chief Registrars of the Supreme Court, Justice Usman Musale (Yobe state) and Danlami Zenchi (Kebbi State).
Their appointments to the appellate bench had attracted a suit by a Southeastern group, Alaigbo Development Foundation (ADF), against the National Judicial Council (NJC), which alleged lopsided appointment of Justices of the Court of Appeal.
In suit No FHC/ABJ/CS/347/21, the Incorporated Trustees of the foundation sued the NJC, Federal Judicial Service Commission, President of the Court of Appeal, Federal Character Commission, and the Attorney-General of the Federation as first to fifth defendants, respectively.
The group asked the court, in its originating summons, to determine whether the defendants could disregard the principle of fairness, due process, and federal character in the appointment of judges to the Court of Appeal, with regards to the southeast zone of Nigeria.
It also asked the court to determine whether the southeast was not entitled to three slots in the ongoing appointment of judges to the Court of Appeal, to fill up the vacancies that were caused by the elevation, retirement and death of the three justices of the Court of Appeal from the zone.
The group prayed the court to declare the actions of the NJC, FJSC, and the President of the Court of Appeal as unjustifiable and unconstitutional for only allocating one slot to the South East.
It also prayed the court to declare that the zone was entitled to three slots in the ongoing appointment exercise and restrain the defendants from continuing with the exercise until the southeast is accorded its rightful slots.
However, Justice Ekwo, in his judgment, held that the plaintiff, having registered with the Corporate Affairs Commission (CAC) under Part A of the Companies and Allied Matters Act (CAMA), 2020, as a foundation acted in ultra vires his objects by bringing the suit.
He particularly noted that under Section 823(1) of CAMA, as a foundation, it has exceeded the perimeters of a foundation by filling the suit.
But, in a swift reaction, counsel to the plaintiff, Max Ozoaka, has vowed to challenge the judgment at the Court of Appeal.
In a letter addressed to the Chief Judge of FCT High Court Abuja, the Chief Registrar, Hadizatu Mustapha, said “the CJN invites your lordship to the swearing in ceremony of the following Justices of the Court of Appeal Abuja, on Monday, June 28, 2021, by 10am at the main court room of the Supreme Court of Nigeria.”