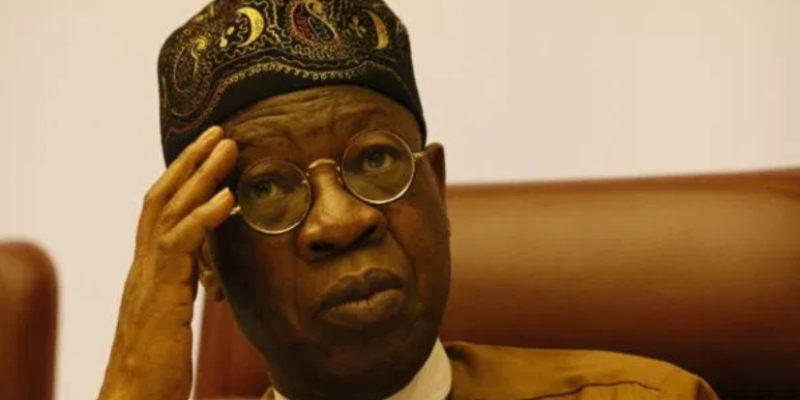 By Braxton Ilobah
Nigeria’s Minister of Information and Culture, Hon. Lai Mohammed is now coming to terms with the reality on ground as he has admitted that the general insecurity in the country is a huge threat to national unity and continuous existence of the country.
He made this disclosure on Thursday in his opening speech at a town hall meeting in Kaduna.  The event was the second of such meeting to take place in Kaduna since it was initiated in 2016 and it was attended by the host Governor Nasir El Rufai of Kaduna, some Ministers and other stakeholders.
According to Mohammed “the Ministry of Information and Culture launched the Town Hall Meeting series in Lagos on April 25th 2016 to provide a platform for the federal government to regularly give account of its stewardship to the people, get a feedback and input from them and, overall, to enhance citizens’ participation in governance. This Town Hall Meeting here today is the 18th edition,” he said.
With the theme “Setting Benchmarks for Enhanced Security and National Unity in Nigeria” for the Thursday event, Mohammed noted  “it is yet another in a series of efforts of government, in its expansive consultation with stakeholders, to address the twin issues of insecurity and its concomitant effect on our national unity and cohesion.”
“Ominously, the general state of insecurity, as reflected in incidences of farmers/herders clashes, Boko Haram insurgency, banditry, ethno-religious clashes and intolerance, cultism, drug addiction and kidnapping for ransom, are now triggering rising call for secession as well as politicization of ethnic and religious differences.”
He went further to say, “bluntly put, the insecurity and its manifestations pose a dangerous threat to the unity of the country and its continued existence as one indivisible nation.”
“How did we get here and what can we do to change the narrative? We believe that finding a way out of the situation in which we have found ourselves requires teamwork, reflecting all diversities and leveraging on all our collective creativity to pursue with diligence the project of rescuing Nigeria.”
He posited that “perhaps the correct starting point towards addressing these myriad of problems is the building of an “elite consensus” on the security, unity, indissolubility and peaceful existence of Nigeria. Such elite consensus had worked in the past. Can we make it work now and proffer solutions in order to stave off the threats to our unity as a nation,” he asked.
He told the audience that ‘this is why we have decided to bring all critical stakeholders together, under a Town Hall meeting setting, to deliberate on the issues and possibly reach a consensus on the way forward. We expect this Town Hall meeting to develop concrete, implementable resolutions, because a lot of talks and postulations had taken place with little or no requisite outcome.”
The Minister was however optimistic that with the seriousness of the issues involved, the expected contributions of a wide range of stakeholders and the quality of our panellists, including the Lead Presenter, Prof. Jubrin Ibrahim, and  Discussants – Mrs Ibukun Awosika, Prof. Chudi Uwazuruike (both of whom were to join virtually), Prof Saka Nuru and Prof (Mrs) Kokunre  Eghafona – the Town Hall Meeting would go a long way in proffering solutions to what has now become an existential crisis.”