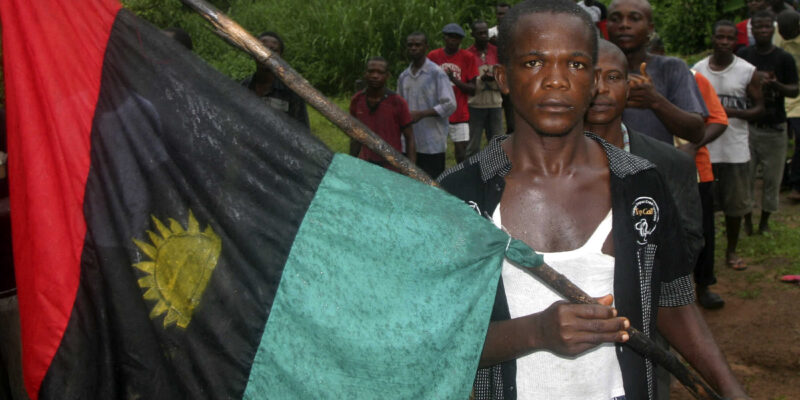 A man carries the Biafran flag during a parade in Ekwe village, near Enugu in southeastern Nigeria, May 27, 2008. The Movement for the Actualisation of the Sovereign State of Biafra (MASSOB) will be celebrating their 41st anniversary throughout eastern Nigeria on May 30, 2008. Picture taken May 27, 2008. REUTERS/George Esiri (NIGERIA) - RTX69BD

Consequent upon the increasing spate of killings in Southeast by gunmen the Amalgamation of Northern Women Associations in Nigeria has asked President Muhammadu Buhari to hold a referendum on the agitation for a Biafran state.

Speaking with journalists on Saturday at the Unity Fountain in Abuja before they embarked on the demonstration, Hadiza Adamu, coordinator of the coalition, said women in the north were at the receiving end because their husbands and brothers have been allegedly killed in the south-east.

Adamu said people should be allowed to belong to a country or leave, adding that their agitation should not end in war.

“We are the amalgamation of northern women from all parts of the north, north-central, north-west and north-east. We as mothers are always at the receiving end of any war, insurrection, killings, and acts of terror,” she said.

“It is for this reason that we come together today and say we don’t want another war, another insurrection.

“When our men were killed, we were raped and our children rendered orphans, we have nowhere to run to. Nigerian history has shown that women carry the heavy burden of war and acts of insurrections and terrorism.

“We have gone through it from 1967 to 1970, our men died and left us with the children to cater for out of nothing, other men that survived simply moved on, but we never moved on.

“INEC offices and other symbols of democracy in the country are being destroyed on a daily basis, our husbands that go to do business in the south-east no longer return home safe, our political leaders who travel to the south-east on national assignments are assassinated in broad daylight.

“Let Igbo have their independent nation away from the rest of Nigeria.”

The proscribed Indigenous People of Biafra (IPOB) has been agitating for a secession of the south-east from Nigeria.