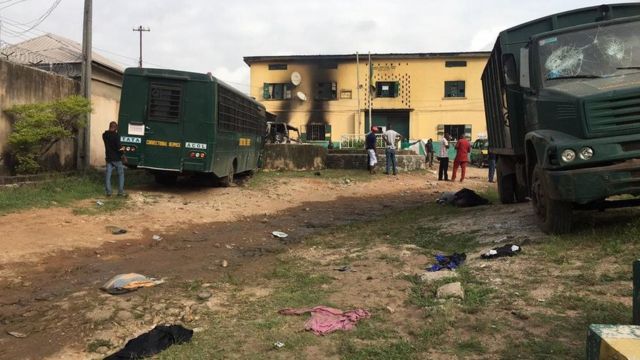 The Human Rights Writers Association of Nigeria, HURIWA, has suggested that  attacks on the police headquarters in Owerri, the Imo State capital, could be to instigate unrestsand deny the region presidency  in the 2023 Presidential elections.

The group said this in a statement sent to newsmen by its National Coordinator, Emmanuel Onwubiko, “We think there is a plot by some persons working and embedded in government in Abuja who wants to instigate unrests in the usually quiet and peaceful Igboland to deny the region of the opportunity of making a strong case to produce the President of Nigeria of a South-East extraction in the 2023 Presidential elections.

“The cheap imagination that the Indigenous Peoples of Biafra (IPOB) may be responsible for these attacks, may not exactly be the true representation of the facts behind all of this sponsored violence in the South East of Nigeria.

“We think that there is nobody with his or her senses intact who is from the South East of Nigeria that is happy that the peace they have enjoyed for a long while is about to be destroyed.”

Meanwhile, Imo governor, Hope Uzodinma, has condemned in strong terms the attack by gunmen at the Police Command Headquarters and the Correctional Service Centre in Owerri describing it as ‘barbaric’.

Uzodinma said government had set up an enquiry panel into the incident with a view to finding out the circumstances surrounding the attack.

He assured that government and security agencies would definitely get to the root of the matter to fish out the perpetrators.

Uzodinma assured residents of the state of their safety noting that government and security agencies would be more proactive to forestall a reoccurrence.

“It has been an eventful day today being Easter Monday in Imo as yet to be ascertained gunmen attacked the correctional service centre, setting some facilities ablaze and releasing some inmates.

“The gunmen were at the police headquarters where they destroyed 38 vehicles and also set the facilities ablaze.

“Efforts by the gunmen to penetrate into the Imo State Government House were not successful as they ended up shooting sporadically at the entrance gate,” he said.

He disclosed that more than 1,800 inmates were at the correctional service before they were freed by the gunmen adding that some of them had started returning voluntarily while others had been rearrested.

The gunmen who operated from 1 am to 3 am, freed suspects in almost all the cells at the State Criminal Investigation Department of the command.