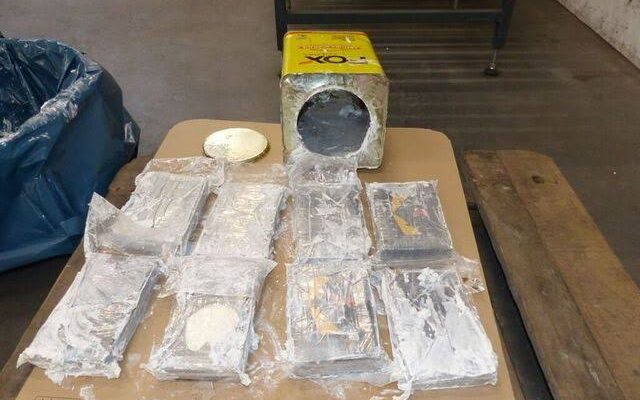 An undated handout photo from Zollfahndungsamt Hamburg, made available on February 24, 2021, shows cocaine found in over 1,700 tins of wall filler after German authorities seized more than 16 tonnes of cocaine in the northern port city of Hamburg, in Europe’s largest cocaine haul to date.

Like supermarkets, restaurants and purveyors of sourdough bread, the illegal drugs trade went digital to serve its customers during lockdown, and could stay that way when the COVID-19 pandemic is over, Europe’s drugs agency said on Wednesday.

“The pandemic is pushing drug criminals online, reinforcing a trend,” said the European Commissioner for Home Affairs Ylva Johansson during the online launch of the 2021 drugs report put together by the Lisbon-based agency EMCDDA.

The pandemic has forced changes to every level of the drugs trade, from wholesale traffickers and smugglers to neighbourhood dealers.

With international travel disrupted and borders shut, smugglers have been relying more on shipping containers and less on human couriers, the report said. The trade proved resilient, with data showing no decline in the amount of cocaine available, while more people were growing cannabis at home.

“The drug market continues to adjust to COVID-19 disruption, as drug traffickers adapt to travel restrictions and border closures,” it said.

“Although street-based retail drug markets were disrupted during the early lockdowns, and some localised shortages reported, drug sellers and buyers adapted by increasing their use of encrypted messaging services, social media apps, online sources and mail and home delivery services.”

Alexis Goosdeel, EMCDDA’s director, said there would be new risks from what the report called “the further digitalisation of drug markets”.

The shift to online transactions made it easier for drug dealers to recruit young people, and to make the push out of big cities into rural areas.

Mental health problems caused by the coronavirus pandemic could push more people to misuse drugs, and the financial impact of the crisis could push them to use “more toxic, more dangerous and potentially more lethal substances,” Goosdeel said.

“We are just in front of a perfect storm,” Goosdeel said. “The drug market is more resilient than ever and is digitally-enabled.”