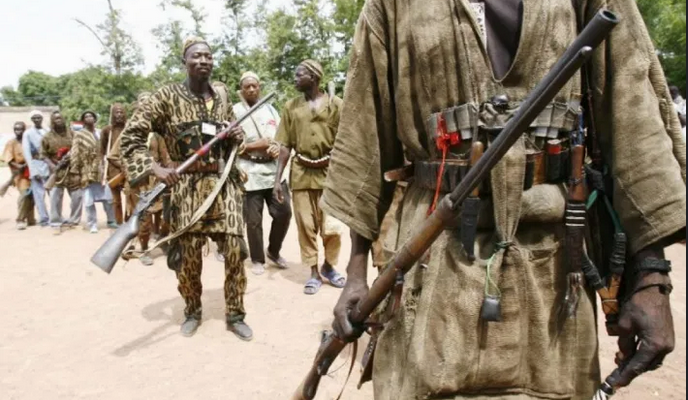 Local hunters in Osun State have urged the state government to maximize the potency of the local security outfit known as ‘Ogoje Ilu’ as a complementary form of security approach for contingent reasons in the state.

They appealed to the state government to synergize with them more on the use of an orthodox policing system to complement the security system.

Chief Ogunbiyi Akamo, Head of the local hunters in Ijesa land, made the call during the Governor’s Family Meeting organised by the Office of the Special Adviser on Civic Engagement in Ilesa.

Akamo while asking the government to sustain peace by strengthening the relationship between the local security outfits and the existing government security agencies, said that Osun still remains one of the most peaceful states in the country.

He expressed hope that the relationship between the two security outfits would reinforce a bottom-up approach to the security network and bridge the disconnect between the local community and the centre in the policing system.

Akamo charged the Adegboyega Oyetola administration to strive more in order to come up with a robust arrangement for internal security that will make a difference and reflect community participation through the use of local security outfits.

The hybridised security framework he hinted will be more driven by local intelligence systems due to their domiciliation among the people.

In his response, the Special Adviser on Civic Engagement, Olatunbosun Oyintiloye, who represented the governor assured the hunters that their aspirations and demands would be given adequate consideration.

He also explained that the meeting was meant to be a forum where the people’s interests and opinions could be represented in the state policy circle which would also serve as a vehicle for strengthening democratic ideals through participatory and inclusive governance.

Meanwhile, Osun government has announced plans to have Fulani-Bororo herdsmen issued with ID cards as part of its data capturing and profiling of herders in the state.

Mudasiru Toogun, Chairman of the Committee on Peaceful Co-existence between Fulani/Bororo and Farmers in Osun, disclosed this at a meeting held with heads of Fulani and Bororo on Wednesday in Osogbo.

Toogun said the data capturing exercise was part of the government’s efforts to strengthen the cordial relationship and peaceful coexistence between Fulani/Bororo herders and Yoruba farmers in the state.

He disclosed that the government would also embark on enumeration and headcount of immigrants in the state.

According to him, the exercise is part of efforts to update the statistics and data of immigrants living in the state.

Toogun said the initiative would help determine the immigrants’ population to prevent any form of security threat that might arise from the influx of migrants.

He noted that the state had worked out modalities to begin issuing identity cards to Fulani and Bororo living in the state as a means of identification.

Toogun explained, “The essence of this meeting is to meet our people, the Fulani/Bororo community, to sensitise them on the need to continue to strengthen the existing bond of unity, peaceful coexistence, and togetherness.

“As we all know and as reported in the media, some states in the country are facing serious security threats, resulting from Fulani-Bororo and farmers crises.”

He  stated that the government would commence “the enumeration and headcount for immigrants, particularly Fulani-Bororo herders living in the state, as part of efforts to fight insecurity.”

In his response, the Seriki Fulani in the state, Ibrahim Babatunde, assured the government of total compliance with relevant rules capable of sustaining the bond of unity between them and Yoruba farmers.