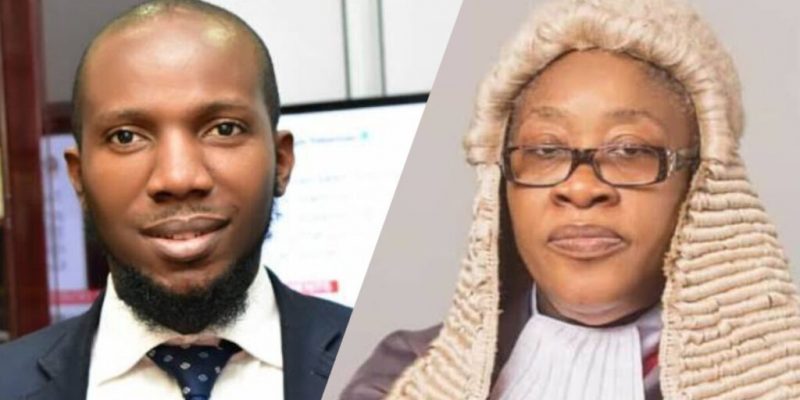 The human rights lawyer, Inibehe Effiong has been given a copy of the judgement committing him to prison.
The Chief Judge of Akwa Ibom, Ekaette Obot made the release following outcry to prevent further embarrassment over the illegal incarceration of the lawyer.
Recall that on July 27, Effiong was sent to prison by the state chief judge after the lawyer reportedly protested against the presence of armed policemen in court.
The human rights lawyer, who is also the National Legal Adviser of the African Action Congress (AAC), was in court to defend Leo Ekpenyong, a lawyer, in a libel suit filed by Udom Emmanuel, governor of Akwa Ibom.
The illegal imprisonment has attracted condemnation from civil society organizations and many Nigerians.
On August 3, the Nigerian Bar Association said the lawyer was not given a fair hearing before he was sent to prison by the judge, and the organisation threatened to petition the judge at the National Judicial Council (NJC).
Only on Monday, Effiong filed a suit at the Federal High Court in Uyo, praying the court to direct Obot to furnish him with a copy of the 27 July judgment to enable him to file an appeal.
He also urged the court to declare as illegal and unconstitutional, the judge’s refusal to release the conviction order, as it violates Section 36 (7) of the 1999 Constitution as amended.
According to the constitution, Effiong is entitled to a copy of the judgment within seven days of the conclusion of the case.
It was gathered that Obot finally furnished the lawyer with the certified copy of court proceedings on Wednesday, 21 days after she sentenced him to prison.
“The Chief Judge of Akwa Ibom State, the Honourable Justice Ekaette Fabian-Obot furnished Inibehe Effiong with the Certified True Copy of the proceedings of High Court No 1, Uyo Judicial Division Akwa Ibom State today (17/8/2022).
“The certified true copy of the record of proceedings was made available 21 days after the conviction of Inibehe Effiong for contempt of court contrary to Sections 36(7) and 294(1) of the Constitution which stipulates that the parties to a cause or matter be furnished with duly authenticated copies of the decision of a trial court within seven days of the delivery thereof.
“The Notice of Appeal against the conviction and sentence of one-month imprisonment imposed on Inibehe Effiong will be filed on Thursday, August 18, 2022,” a source told SaharaReporters.
A source said the judge “hurriedly returned from vacation to release the doctored copy of the proceedings”.
“The Chief Judge is currently working round the clock to doctor the proceedings in which she used to sentence Inibehe after condemnation from right and left.
“Different people have exposed her, even lawyers present in court faulted her decision. The NBA leadership also said that her judgement did not follow due process,” a judicial source revealed.
Indeed, the Nigerian Bar Association (NBA) President, Olumide Akpata, had picked holes in the procedure adopted by Obot in jailing the lawyer.
Akpata said the association might be forced to petition the National Judicial Council (NJC) over the action of the chief judge.
“Regardless of the conduct of Mr. Effiong in the courtroom on the date of the proceedings that led to his committal, one thing that has come out from the various accounts that the NBA has so far received is that Hon. Justice Ekaette Obot did not follow due process in the committal proceedings,” Akpata tweeted via his Twitter handle on Wednesday, August 3.
The NBA president cited denial of fair hearing among the breaches allegedly committed by the judge in sending Effiong to prison.
“Mr. Effiong was not put in the dock, told what his wrong or contempt was, given fair hearing or even an opportunity to recant or purge himself (a courtesy that the Bench should, at the minimum, extend to counsel where counsel’s conduct is said to be contemptuous).
“This, on its face, not only runs afoul of known practice and procedure in such cases, but is also unconstitutional.
“In view of the foregoing and depending on the outcome of our ongoing investigations, the NBA may be forced to take this matter up with the National Judicial Council.”