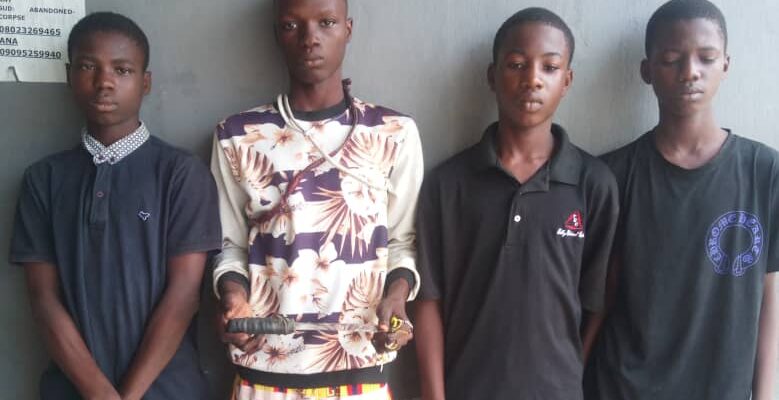 By Braxton Ilobah
What looks like a revenge mission by four teenage cult suspects from Ogun State have landed them in Lagos police net following the operational intelligence of detectives from Alakuko Division of the Lagos State Police Command.
It was gathered that operatives of the Division on Friday, arrested the four (4) suspected cultists who came from Ogun State for reprisal attacks on other rival cult members at the Junior Secondary Schools, Akinyele, Alakuko, Lagos State.
The suspects are Tosin Balogun, 18, Sunday Dare 15, Olayinka Jubril 14 and Sani Ayomide Babatunde,15.
Tosin Balogun and Jubril Olayinka are students of Odewale Community High School Ijoko Ogun State,  while Sanni Babatunde is a student of Tunik International School, Dalemo Alakuko and Dare Sunday is a tailoring apprentice at Dalemo Alakuko. 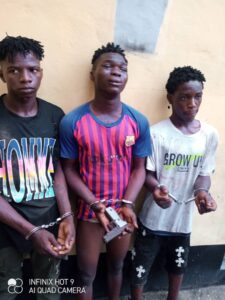 Securityreporters.com sources revealed that detectives had got winds of the planned reprisal attacks on their rivals in the school and raced to the scene immediately the suspects arrived to cause pandemonium and attack their targets.
Cutlasses, weeds suspected to be Indian hemp and assorted charms were reportedly recovered from them.
In another development, the operatives of D9 (Anti Robbery) Section of the State Criminal Investigation Department, Panti, Yaba on Saturday, acting on squealed information, arrested a gang of armed robbers/suspected cultists namely:  Victor Alfred, Chubike Ikeh Donatus and Isiaka Olamide, all 19 years of age, at Marble Guest House, No 33 Ajibike Street, Ogudu Ojota, at about 3.25m.
One Beretta pistol, weeds suspected to be Indian hemp and assorted charms were recovered from them.
Lagos State Police spokesman CSP Olumuyiwa Adejobi said the Commissioner of Police, Lagos State,  Hakeem Odumosu, has ordered that the suspected cultists be moved to the Command’s Special Squad, Ikeja, for proper investigation and possible arrest of other members of their gang, while the suspected armed robbers be properly investigated and profiled by the Anti Robbery Section of the State CID.
The police boss reiterated his commitment to eradicating cult related crises and other forms of criminality in Lagos State; and making the state very hot for the survival and operations of any cult or armed robbery group in the state.