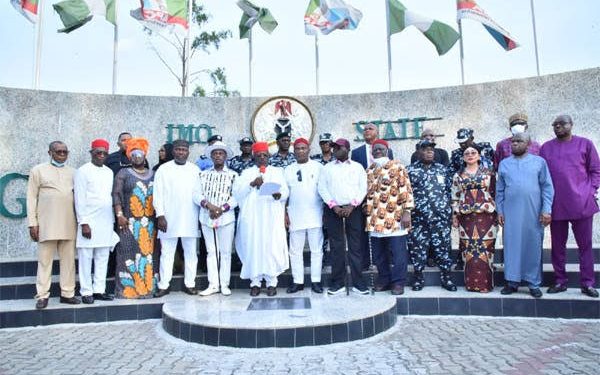 Hours after South-East Governors met to deliberate on rising insecurity in the region, gunmen attacked another community in Ohaukwu Local Government Area of the state on Sunday.

The Commissioner of Police in Ebonyi, Aliyu Garba, on Monday  told reporters that the gunmen attacked Ebele village, Umuogodo Akpu, Mgbo in the LGA.

Mr Garba said: “on the effects of Sunday attack, it is yet to be ascertained. We are yet to get any report from there and I have not been around. I am waiting for the report.’’

However, the Commissioner for Internal Security and Border Peace Stanley Okoro-Emegha,  said he was yet to get details of the attack.

“They said it was a communal crisis, while others said it was herdsmen who carried out the attack, but we do not know the people behind the attack yet.

“We cannot say exactly what happened although we heard about the attack this morning (Monday). Nobody has called to say somebody died or property destroyed, but we shall find out. Right now, we do not know who is responsible,’’ Mr Emegha said.

Governors in the South-east rose from a meeting in Owerri on Sunday where they deliberated on rising wave of insecurity in the region.

At the end of the meeting, they jointly endorsed the formation of a region-wide security organisation tagged “Ebube Agu” (fear of a lion).

The governors and heads of security agencies in the region signed a communiqué to maintain the joint security outfit.

The communique read: “after discussions on the current security challenges in the southeast and with valuable contributions from participants at the security summit in Owerri, it was resolved as follows:

“To strongly and unequivocally condemn terrorism and banditry in any part of Nigeria, particularly in the South-east.

“The meeting strongly condemned the burning of police stations, violent attacks on custodial centres with the unlawful release of inmates, and the killings including security personnel, natives/farmers and herdsmen.

“That the political leadership in the South-east has resolved to bring together all the arsenals at their command, as one united zone, to fight and flush out criminals and terrorist from the zone.

“That the heads of all the security agencies in the southeast have resolved to exchange intelligence in a seamless, effective new order that will help to checkmate crime in the zone.

“That to fast track crime-busting in the southeast, the heads of security agencies have been mandated to draw up a comprehensive list of their logistics and material needs for sustainable success in the fight against criminality, for the immediate provision by the leadership of the southeast.

“That a committee made up of security personnel, government officials and relevant stakeholders be set up to coordinate and monitor the implementation of the southeast joint security platform.

“The meeting resolved to maintain a joint security vigilante for the southeast, otherwise known as Ebube Agu.”

Also in attendance at the security summit was the President-General of Ohanaeze Ndigbo worldwide, George Obiozor as well as top security chiefs in the zone.

Some persons were reportedly killed in that attack.