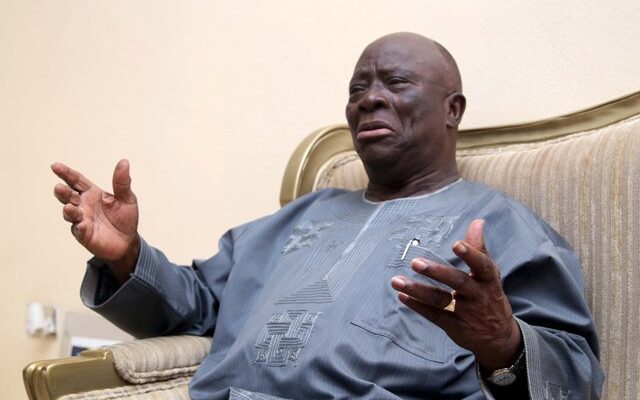 The Yoruba group has posited that the process for a genuine consensus on an acceptable national constitution should begin with the production of position documents by all nationalities between now and December.

Chief Ayo Adebanjo, the leader of Afenifere made the submission at the ‘Nigeria’s 2023 Presidential Transition Inter-Ethnic Peace Dialogue’ organised by Youths Off The Street Initiative.

He said going forward, Nigerians should be allowed to exercise their rights and sovereignty on how they wanted to live together under mutually beneficial terms.

The nonagenarian said the various regions in the country should be allowed to choose the type of government they wanted to adopt within their area under a truly federal structure which would guarantee some measure of autonomy and control over resources and policing of their entities.

According to him, there should be no artificially prescribed number of regions in a manner that may foreclose the rights of the people that desire to organise themselves as a semi-autonomous regional member of the Nigerian state so long as the territory desiring such regional status could guarantee its self-sustenance and viability as an entity.

Adebanjo said the constitution must also emphasise true federalism in such a way that no region or area would have the power to lord it over another region or area.

Among the expected contents of the envisaged regional constitutions as envisaged by Afenifere were unreserved powers of the regions over natural resources in their respective areas, like agriculture, education, health, electricity, security and economy.

He also proposed that each region should contribute 10 per cent of what it generates to the national purse, while retaining 30 per cent, with the states taking 35 per cent and the local governments taking 25 per cent.

In his submission, the President-General of Ohanaeze Ndigbo, Dr George Obiozor, said while it fully endorsed the proposals by Afenifere, the organisation believed there was the need for an emergency national conference to consider the proposals of various ethnic groups and also review the reports of previous national conferences so as to come up with a new constitution accepted by all.

Obiozo however, said that time had come for political power to shift from the North to South in the interest of transparency and equity.

The Chairman, Igbo World Assembly representing 57 countries, Dr Nwachukwu Anakwenze, who spoke from Los Angeles, United States, warned that the country was running out of time.

He said, “We are in the last hours of our existence as a country. We are on the 11th hour, it’s almost too late. We have many things to deal with. It has never been like this. Appointments from one particular area because you’re the president has not been so. It has never been like that. We can’t tolerate that; we say implement restructuring and devolution of power.”

The leader of the Northern Consensus Initiative, Dr Awal Abdullahi, said the North was no longer opposed to a break-up of the country.

Abdullahi said, “The North, before now, was saying ‘we don’t believe in separation’; but as I’m standing, I’m telling you that if there is going to be separation tomorrow, the North is ready for it. We are also ready, let’s go our different ways and I am telling you this with all sincerity

“Northern Nigeria, before now, did not want to hear anything separation; but as at today, as I speak to you, the North is equally ready. What I am saying might be controversial, but I am speaking the minds of Northerners and I have no apology to anyone in this hall. Although I respect the leaders and elders here, I have no apology to anybody on what I say.”

However, another speaker, the President of the Middle Belt Forum, Dr Pogu Bitrus, mounted the rostrum to respond to Abdullahi’s position countering that the Middle Belt would not pull out of the country with the core North.

He said, “So if my brother says the North is going, be sure the Middle Belt is not going with you; you are on your own. We have served and sacrificed for this country. The (civil) war that occurred, the Middle-Belt was used to fight while the North sat back to enjoy.”

Bitrus said the Middle Belt adopted the proposal of Afenifere and Ohaneze as a common position that would save the country.