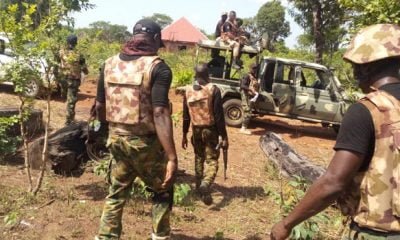 The rules of military engagement in quelling communal crises especially  in parts of Konshisha Local Government Area of Benue State has been questioned.

A group known as Shangev-Tiev Assembly (STA) said many lives have allegedly been lost and several property destroyed as a result of the engagement.

Addressing newsmen in Makurdi on Friday, the group, led by Elder Tyoh Jude lamented that the military invasion had rendered many of their kith and kin homeless while many innocent people have also been killed by the military.

“We make bold to question the rules of military engagement in quelling communal crises. Does the communal conflict between (Mbator) Shangev-Tiev of Konshisha LGA and the (Okpute) Igede of Oju LGA constitute an insurrection or external aggression? THE ANSWER IS A CAPITAL NO,” the groups emphasized .

The group strongly condemned the killing of military officers in the area but regretted that over 70 persons including women children and the aged have been reported dead and more than 100 persons missing so far since the alleged invasion of the military in the area began a few days ago.

“The general public may wish to know that the Nigeria Army had consistently deployed fighter helicopters that operate on daily basis and scores of armoured vehicles that continually shell sophisticated firepower to kill and destroy property of our people.

The members of the Shangev-Tiev Assembly lamented that several houses including that of the oldest traditional ruler in the area were burnt down already by the military lamented stressing that many people have also died from trauma occasioned by the violent invasion.

It reaffirmed that insecurity in all its forms and manifestations constitute one of the most serious threats to national unity and peace adding that any act of banditry is criminal and unjustifiable, regardless of any acclaimed motivation, wherever, whenever and by whoever.

“We reaffirm the need for government at all levels to combat criminality within the provisions of the extant laws of the land.

“We wish to further state here that the Nigerian military is recruited, trained and remunerated by tax-payers money and is vested with the constitutional duty to defend the territorial integrity of the country against internal insurrection and external aggression,” the group maintained.