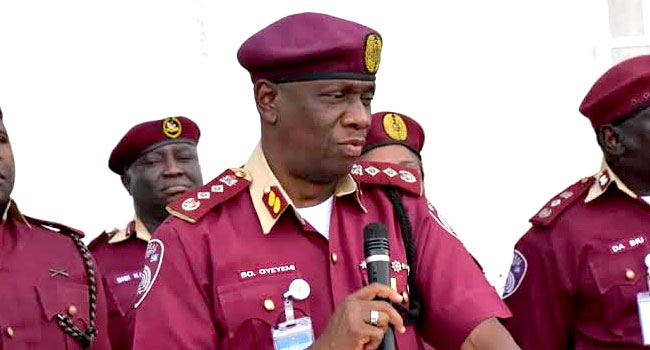 By Frank Oshanugor
Motorists in Nigeria have been advised to take the issue of safety seriously particularly during the Eid-Kabir celebration by Muslim faithfuls over the world.
In a press statement on Monday,  the Corps Public Education Officer of the Federal Road Safety Corps (FRSC) Bisi Kazeem quoted the Corps Marshal, Dr. Boboye Oyeyemi as giving the advice while felicitating with the Muslims at this year’s Eid-Kabir Sallah celebration. He urged motorists in various parts of the country not to undermine the issue of safety in the frenzy of the celebration.
The Corps Marshal has also in his Sallah message assured members of the public that the ongoing FRSC’s special patrol across the country was intended to ensure safety, orderliness and discipline among road users before, during and after the celebration.
According to the press statement, “Oyeyemi while felicitating with the Muslim Ummah on the occasion of the Sallah celebration, has urged them to learn from the discipline and trustworthiness exemplified by Prophet Ibrahim as is observed through the sacrifices by always showing discipline and consideration for other road users to avoid the menace of road traffic crashes.”
Oyeyemi particularly reminded members of the public that as it has been the tradition of the FRSC during festive periods, adequate operational measures have been put in place across the country including deployments of monitors from the National Headquarters of the Corps to create safer road environment for all road travelers towards safe and smooth celebration.
He added that the special patrol teams have been given strict directives not to tolerate act of indiscipline by recalcitrant drivers, warning that appropriate sanctions would be applied against any violators of traffic rules and regulations during the special operations to serve as deterrence for others.
Kazeem added that as part of the Corps’ commitment to keeping the roads safer during the celebration, the Corps Marshal has given directives to the teams to put special focus on certain identified offences including Wrongful Overtaking, Use of Phone while Driving, Drivers Licence Violation, Lane indiscipline while they would embark on prompt removal of rickety vehicles; obstructions from the road and sanctioning of drivers with expired/ worn out tyres and those that operate without spare tyre among other offences.
The Corps Marshal enjoined members of the public to cooperate fully with the patrol teams and other volunteers that are joining in the operations, stressing that they should not hesitate to report cases of road mishaps and other emergencies to the FRSC through the national emergency number: 122 or directly to the studios of the National Traffic Radio (NTR) through numbers 08056294021 or 08056295022 for prompt response