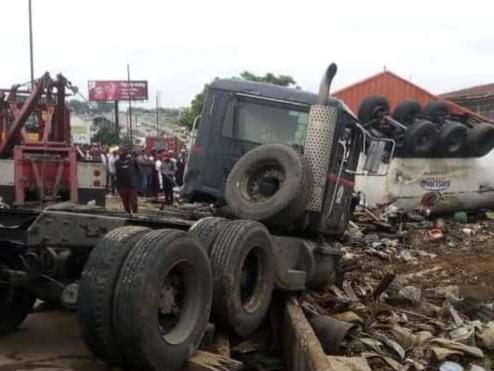 By Nkasi Kolie
Oyo State Police Command has confirmed that five persons lost their lives on Sunday morning, when a fully loaded gas tanker in Ibadan, the Oyo State capital, suffered a brake failure.
The Sector Commander, Federal Road Safety Corps (FRSC), in the State, Mrs. Uche Chukwurah, however, said four persons were killed and six injured in the incident, which  occurred at the Bode Market, Molete, when the truck carrying liquefied petroleum gas (LPG), reportedly lost control and rammed into the market, famous for selling of herbs.
Eyewitness account said that the tanker was moving from Idi-Arere towards Molete, when it lost control, veered off into the market and wreaked havoc.
The tanker was also said to have vandalised some cars on the road before it finally came to a halt in the market in an upside-down position. One of the eyewitnesses said he counted five corpses.
According to an eyewitness, “The gas tanker was moving from Idi-Arere side to Molete. But it suffered brake failure. The driver lost control of the vehicle and the tanker overran some traders. I can tell you that scores were injured.
But security operatives and men of the Oyo State Fire Service rushed to the scene of the accident, and made frantic efforts to put the situation under control.
The Oyo state Police Public Relations Officer, Adewale Osifeso, who confirmed that five persons died in the accident, however, could not confirm the number of people that were injured.
A concerted effort by security agents and fire brigades, Osifeso said, helped to manage the situation successfully, which prevented the fire outbreak.
Osifeso said: “It is a case of a fatal motor accident, involving a gas carrying tanker and a tricycle. So far, five persons have been recorded dead  and  deposited at the morgue. The number of injured persons is yet to be  confirmed. The police, in a concerted effort with the fire service, have successfully managed the situation to ensure there’s no fire outbreak.
“Efforts to evacuate accident vehicles are currently ongoing. Investigation to ascertain the identities of the deceased is currently at top gear. However, the situation is under control and further development will be communicated soonest please.