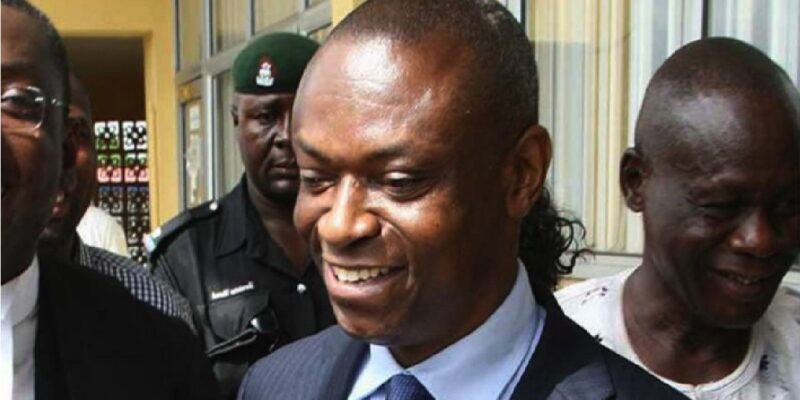 By Nkasi Kolie
The Economic and Financial Crimes Commission, EFCC, on Wednesday finally secured the conviction and sentencing of Francis Atuche, a former Managing Director of the defunct Bank PHB Plc ( now Keystone Bank), to six years imprisonment for N25.7bn fraud before Justice Lateefat Okunnu of the Lagos State High Court, Ikeja.
The trial had commenced since 12 years ago.
Justice Okunnu in a judgment that lasted over ten hours, also sentenced the defunct bank’s former Chief Financial Officer, (CFO) Ugo Anyanwu, to four years imprisonment.
The duo were convicted on six of the amended 27-count charge of conspiracy to commit a felony and stealing preferred against them by the EFCC.
The Judge, however ,discharged and acquitted Atuche’s wife, Elizabeth on the grounds that the Commission failed to link her to the crime as suspicion could not take the place of fact.
The Judge held that the prosecution could not prove that she was aware of the source of the funds she received from her husband.
The EFCC had, in 2011, arraigned Atuche, his wife and Anyanwu, for conspiracy and stealing to the tune of N25. 7bn. They pleaded not guilty to the charges preferred against them, thereby leading to their full trial.
About three years into their trial, Atuche and his co-defendants approached the Court of Appeal, Lagos Division, challenging their trial by the lower court for lack of jurisdiction.
The Appellate Court, in a judgment delivered in September 2016, had stopped the lower court from going ahead with the trial.
Though the Appeal Court refused the defendants’ prayer to squash the charges against them, it ordered Justice Okunnu to hands-off the trial and further directed the Chief Judge of Lagos State to re-assign the case to another judge.
Dissatisfied by the ruling, the EFCC approached the Supreme Court to set aside the decision of the appellate court and order continuation of trial in the matter.
During the hearing at the apex court, counsel to the defendants, Kemi Pinheiro, SAN, stated that the case had gone far at the lower court, adding that the appellate court’s decision had prolonged the speedy conclusion of the trial.
In a unanimous decision, a panel of the apex court, overturned the decision of the appellate court. Justice Ejembi Eko, who prepared and read the lead judgment of the apex court, held that the September 23, 2016 order of the Court of Appeal directing the Chief Judge of Lagos State to re-assign the case to another judge ran out of sync with justice.
The apex court panel further held that the appellate court failed to give any reasons for disqualifying the trial judge, Okunnu.
The Supreme Court, therefore, directed that the case be returned to Justice Okunnu for continuation of trial of the defendants.
Delivering her judgment on Wednesday, the judge held that the EFCC has successfully proved its case against the defendants beyond reasonable doubt.
She upheld the arguments of Pinheiro, who prosecuted the case with the fiat of the Attorney General of the Federation (AGF) and Minister of Justice, Abubakar Malami.
Pinheiro had opposed Atuche’s contention that the stolen funds in dispute were loaned and not stolen.
The Judge held that “The 1st Defendant confirmed the bank’s ownership of the money when he said the bank in lending money makes profit.
“I am persuaded by the statement of Pat Utomi that ‘The bank still has control over money that’s left in its coffers, no matter who uses it.
“Helen Eriyo, who is the account officer of Petosan, being unaware of the loans granted, lends credit to the testimony of Mr. Ololo that he was not aware of the loan.
“The 1st and 3rd defendants did not debunk the evidence of the prosecution that the loans were used to purchase shares. They rather contended that the monies granted as loan could be used for whatever purposes.”
Consequently, the judge held that Atuche and Anyanwu abused their powers, and positions to confer undue financial benefits on themselves without regard to the health of the bank. ”The convicts stole from the bank and depositors and because of their action, taxpayers money was used to bail out the bank,” the judge noted.
She added that, though she acknowledged the pleas of the defendants, there must be consequence for bad behaviour. She therefore convicted and sentenced the the first defendant, Atuche to six years imprisonment and third defendant, Anywanwu to four years imprisonment.They are to serve their jail terms consecutively.