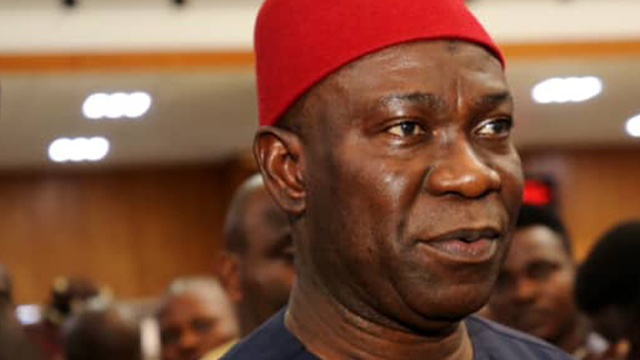 The apex Igbo socio-cultural organisation, Ohanaeze Ndigbo has disagreed with the Attorney-General of the Federation, Abubakar Malami that the federal government will not intervene in the court case of former Deputy Senate President, Ike Ekweremadu who is facing trial over an allegation that he wanted to harvest an organ of one David Nwamini in the United Kingdom.

In a press release on Sunday titled ‘Ekweremadu: Ohanaeze disagrees with Malami, calls for FG’s intervention’ signed by the National Publicity Secretary, Dr Alex Ogbonnia, the group alleged that the government had engaged in matters concerning Nigerians abroad like that of Ekweremadu.

Ohanaeze argued that any humiliation meted out to the Nigerian lawmaker is an injury to Nigeria as a whole, and called on the government to deploy its diplomatic exploits to intervene and bring the case to the country.

The statement reads: “The Ohanaeze Ndigbo Worldwide has disagreed with the statement credited to the Attorney General of the Federation and Minister of Justice, Abubakar Malami, that “the Federal Government of Nigeria will not interfere with any local or international legal battle involving the former Deputy Senate President, Sen. Ike Ekweremadu, who is currently facing trial for alleged organ harvest in the United Kingdom”.

“Malami disclosed this to journalists on Thursday at the 46th Session of the State House Briefing organised by the Presidential Communications Team at the Presidential Villa, Abuja. The AGF further claimed that “it has never been the tradition of the Nigerian government to interfere in anything judicial, local or international”.

cultural rights that form the basics of international relations. To this end, sovereigns usually interfere to save their citizens in foreign countries.

“In the case involving Ekweremadu, it should be recalled that the former Deputy President of the Senate had written to the UK High Commission to support a visa application of a “donor” listed as David Ukpo Nwamini. In the letter, Ekweremadu made a full disclosure that Mr. Ukpo was undergoing “medical investigations for a kidney donation to his daughter”. The full name of the UK hospital was also stated and nothing shady.

“The Ekweremadu letter to the British Embassy was unequivocal. He indicated the purpose of his travel and also requested the Embassy to grant a visa to Mr Ukpo for a stated purpose. We view Ekweremadu’s full disclosure as proof of non-criminal intent.

“We are persuaded to join Sadiq Obanoyen and several others to ask if it was not unconscionable or even conspiracy on the part of the British government to issue a visa to David Nwamini following full disclosure by the Senator that Nwamini was travelling to the UK for organ donation, but only to do 360 degrees and charge the Senator and his wife for facilitating illegality? In other words, would it not have been fair and just to refuse a visa to Nwamini in the first place, citing the UK modern slavery legislation, especially as the UK is never known to be so generous with visa to Nigerians?

“Attention is drawn that Ekweremadu’s letter and intentions were predicated on the principles of cultural relativism which emphasises that a “person’s beliefs and conducts should be understood based on that person’s own culture”.

“For instance, every dispassionate Nigerian knows that the practice of organ harvest has over the years become a Nigerian provenance and of course, it is not viewed as unlawful so long as there is a mutual agreement between the parties involved.

“It is in the context of cultural relativism and the premium placed on their citizens’ welfare and national pride, that countries deploy their diplomatic

weights and resources to ensure their citizens obtain justice and even reprieve in a foreign land, no matter the gravity of the offence.

“A few examples may suffice.

a) The British Government intervened in favour of an ex-British serviceman, Captain Simon Mann, and the son of the late Prime Minister of Britain, Sir Mark Thatcher, who both faced charges in Zimbabwe, South Africa, and Equatorial Guinea over a planned 2004 coup in the Central African country.

“b) Samantha Orobator, a British citizen was arrested in Lao People’s Democratic Republic in 2008 over drug trafficking and the case was subsequently transferred to the UK.

“c) In the highly celebrated case involving a US citizen, Brittney Griner, the Women National Basket Ball (WNBA) star that was standing drug-related trial in Moscow. The U.S Secretary of State, Anthony Blinken revealed that the U.S had offered a deal to Russia aimed at transferring the case to the US. Also included is Paul Whelan who is serving a 16-year prison term in Russia for spying.

“d) Back home, in late 2018 and 2019, Nigeria brought her full diplomatic weight to bear in securing the release of Ms. Zainab Aliyu Kila, a Nigerian lady, after 124 days in Saudi Arabia prison over alleged drug trafficking. A statement by the then Senior Special Assistant to the President on Diaspora Affairs at the time, Abike Dabiri-Erewa, explicitly stated that the President had directed the AGF, Malami, and other key government agencies to intervene.

“Ohanaeze Ndigbo believes that Ekweremadu’s case should not be different, especially when Nigeria enjoys longstanding cordial relations with the UK, and all the individuals involved in the UK case are Nigerian nationals.

“There is nothing beyond diplomatic redemption once the political will is there.

“It is rather curious that the AGF is making reference to Nigeria’s “Child Rights Act” more than a month after the UK Court ruled that the “donor” is not a child. One would expect Nigeria to feel scandalised by the initial contempt by the British authorities in discountenancing an official document of Nigeria on the “donor’s” age in the first place and feel disrespected by the continued refusal to grant Ekweremadu bail for a clearly bailable offence.

“We reckon that Nigeria could never meet the same treatment to a British parliamentarian of Ekweremadu’s pedigree.

“Ohanaeze believes that Ike Ekweremadu has served Nigeria meritoriously in various capacities while in the Senate as the Deputy President of the Senate; the Speaker of the Economic Community of West Africa States (ECOWAS), among others, and was decorated with the service honour of the Commander of the Federal Republic-CFR.

“The Nigerian government and indeed all Nigerians should know that a measured indignity to Ike Ekweremadu, an illustrious Igbo and a serving senator of the Federal Republic of Nigeria is a sad denouement to Nigeria and indeed entire Africa.

“We urge the Federal Government of Nigeria led by President Muhammadu Buhari and Mr. Geffrey Onyeama, the Minister of Foreign Affairs; Nigeria High Commission in the UK, the Senate and House of Representatives of the Federal Republic of Nigeria to burnish their diplomatic channels in ensuring that Ekweremadu and the wife get the desired assistance by transferring the case to Nigeria.”