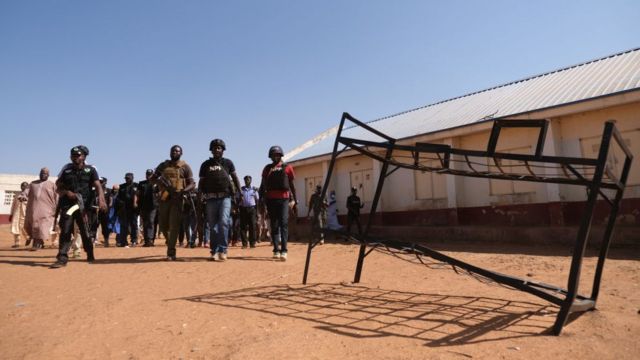 A civil rights advocacy group; Human Rights Writers Association of Nigeria (HURIWA) has lamented the lack of effective and transparent military actions to end the terrorism, banditry and kidnapping going on in the Northern part of Nigeria and other places, even as it insisted that armed bandits terrorising schools possibly have patrons in government circle.

This is coming on the heels of the early morning abduction of some students of Bethel Baptist Secondary School, Maramara Chikun Local Government Area of Kaduna State on Monday.

Arguing that the terrorists staging these kidnappings are pampered by government at the Centre most likely because they have strong supporters at the corridors of power in Abuja, the Rights group condemned the overwhelming military might unleashed by federal government against Ingenious People of Biafra (IPOB) and Yoruba Nation Agitators, but same government treats armed terrorists including armed Fulani herdsmen, militia and kidnappers with kid gloves.

“Millions of Nigerians are much more than convinced that the terrorists who are mostly of Fulani ethnicity are being treated like very important persons with the likes of Ahmed Gumi a Moslem Cleric anchoring massive Campaigns for amnesty to be granted to these terrorists, the same President has invested humonguous amount of public fund to chase after unarmed agitators and even traversed the globe to catch and repatriate Nnamdi Kanu back to Nigeria with hundreds of unarmed members of IPOB killed in several Military and Police operations.”

HURIWA  in a statement on Monday also condemned the total indifference that President Muhammadu Buhari shows whenever school children are kidnapped apparently because they are kids from poor homes.

The group added that “The Northern armed bandits who are truly terrorists armed with military grade sophisticated weapons but nicknamed as armed bandits by government seems to be carrying out a well-coordinated political agenda to score huge funding mileage. We have said it before and we are hereby repeating the well known gameplay of Northern elites in government who are deploying terrorists to terrorize Nigerians so that their agenda to create well funded amnesty commission for armed Fulani militia is actualized”.

“The central government conveniently looks the other way as children of the poor are kidnapped and killed whereas politicians send their kids to Europe for better education in better secured climes. The governor of Kaduna State, if he has any shame left in him should resign forthwith. He has recently been caught pantsdown pretending to have enrolled his children to public schools but when he was caught for secretly withdrawing these children he then tried to speak from both sides of his mouth by claiming that kidnappers were gunning for them. Then 24 hours later, these terrorists have now struck and abducted several children of poor homes”.

“How many more lives of innocent poor children would be sacrificed before these incompetent political office holders resign and let the most efficient politicians to handle the unprecedented security challenges? The continuous stay in office by these Executive office holders who violate the primary constitutional duty of government is tantamount to treason. We subscribe to the scholarly submission by an expert on the ten major constitutional Duties of Government in Nigeria to their Citizens which were listed thus: Upkeep of the Federal law and order; Protecting properties and lives of the inhabitants , support the external relationships between countries; Ensure citizens are employed , gives space to democracy and social justice; The Stipulation of social well-being of the citizens;, Promote the economic development of the country, defense of civil right, and to Provide standard Education, insure  constant electricity supply.”

HURIWA quoted Section 14 (1) (2) (a) (b) of the Constitution of the Federal Republic of Nigeria (CFRN) of affirming thus: “14. (1) The Federal Republic of Nigeria shall be a State based on the principles of democracy and social justice. (2) It is hereby, accordingly, declared that: (a) sovereignty belongs to the people of Nigeria from whom government through this Constitution derives all its powers and authority; (b) the security and welfare of the people shall be the primary purpose of government”.

There have been conflicting reports on the actual number of Bethel students kidnapped in the early morning attack but the Kaduna State Police Command has confirmed the attack, adding that 17 students have been rescued already.