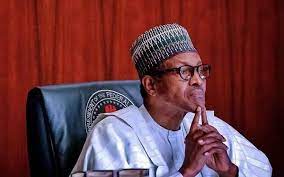 By Braxton Ilobah
A former General in the Nigerian Army has advised President Muhammadu Buhari to be very cautious with the handling of Nnamdi Kanu, the self acclaimed leader of the Indigenous Peoples of Biafra (IPoB) arrested last week by security agents and taken into custody of the Department of State Service (DSS) on the orders of Abuja Federal High Court.
In the same vein, the former army top shot called for caution in the manner security forces are pursuing the Yoruba self determination activist, Mr. Sunday Adeyemo (a.k.a. Sunday Igboho) whose private residence in Ibadan Oyo State was attacked by a combined team of DSS and soldiers during which lives were lost last week.
Speaking in an exclusive interview with SECURITYREPORTERS.com on Wednesday in Lagos, the retired General who pleaded for anonymity (since he did not want issues with present government) said that the present situation in the country truly called for self determination of those ethnic or regional groups that are feeling terribly marginalised.  “Yes, we agreed to live as one indivisible and indissoluble nation, but certain conditions must be in place to make it work,” he said.
According to the General who hails from the Middle Belt area of the country, the fact that agitation for self determination as we have now, was not a common issue some eight or ten years ago, clearly suggests that the country’s leadership has gone the wrong way particularly with respect to the high incidence of insecurity in present time.
He advised that what Nigeria needs at the moment is strategic articulation and understanding of what has actually informed the agitation for  Biafran and Oduduwa Republics almost at the same time with the same level of seriousness.
Though, he does not encourage arms struggle or violence towards actualising Biafra or Oduduwa, yet he strongly believes Nnamdi Kanu and Sunday Igboho who are the faces of the struggle should not be dismissed with a wave of the hand as they enjoy large followership from their ethnic and regional space.
Buttressing his position with the recent declaration by the seventeen Southern governors that the Federal Government should seek to inform governors of any states security forces are to carry out any arrest like the incident at Sunday Adeyemo’s residence, is a pointer to the fact that the Southern Governors are not happy with the attempt to intimidate those activists fighting on their behalf.
The General has therefore advised President Buhari to devise a means of bringing the agitators to a round table dialogue to truly understand why they are bent on self determination struggle and what could be a better alternative in keeping Nigeria as one united country.
He cautioned that the continuous use of force to silence the agitators would in the fullness time escalate the tension and insecurity situation in the country, thereby over-stretching the military in fighting many battles to keep the country at peace