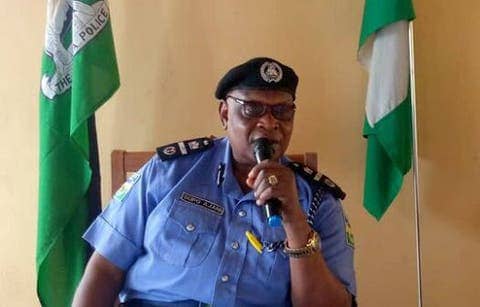 By Frank Oshanugor
Worried by the endless report of corrupt practices in the Nigeria Police Force,  a retired Assistant Inspector General of Police (AIG) at Zone XI, Mr. Olasupo Ajani has canvassed for the jailing of  any police officer found guilty of corruption.
The former AIG said this during his retirement parade held at the Osogbo City Stadium on Tuesday just as he noted that politics remains the major obstacle affecting effective policing in Nigeria.
He argued that with the present constitutional arrangement, it would be difficult for politicians not to mingle in police affairs saying “Policing and politics can be uneasy bedfellows, perhaps best kept at a respectful distance from one another. With the present constitutional provisions, the idea of operational independence from political control is not attainable.”
“As a police officer, you may promise to serve without fear or favour but it is very difficult to stay out of politics. Politics has increasingly got stuck into policing, and if we are not careful politics can get into the way of policing.”
He charged journalists to always ensure that policemen do not get away with crime but they must also be objective in exposing such criminality.
“I would like to thank the press who observe and report on us. The experience of recent history tells you that when policing gets it wrong individually or institutionally, the consequence can be devastating.
“I want journalists therefore to question and challenge us when circumstances demand. I don’t want them to let us get away with any single atrocity observed. But in the process, they must be balanced in their reportage.
“The prevailing media narratives about policing in this country are astonishingly hostile, with accusations that the police are corrupt, incompetent etc. There are bad eggs in every organization, and we must remember that the police are the mirror of the society it serves.
“The character of the police of any society is the character of that society, so each society deserves the kind of police it has.
“But crime is rising; the population is increasing, officers’ numbers are falling, which means we need your help and support more than ever before. Although you demand high expectations from us, you also need to understand the incredible pressures we now face. The truth is that we will always do our job better when we do it side by side with you.
“The second appeal to journalists is to understand that there is a difference between mistake and misconduct. There are a handful of people in policing who abuse position and power due to corruption and criminal motives, those people belong in jail.
“But then, there are thousands of good police officers doing sometimes impossible job in the frequently impossible circumstances, making life or death decisions in fractions of seconds thereby giving room to honest and entirely human mistakes,” the retired AIG said.