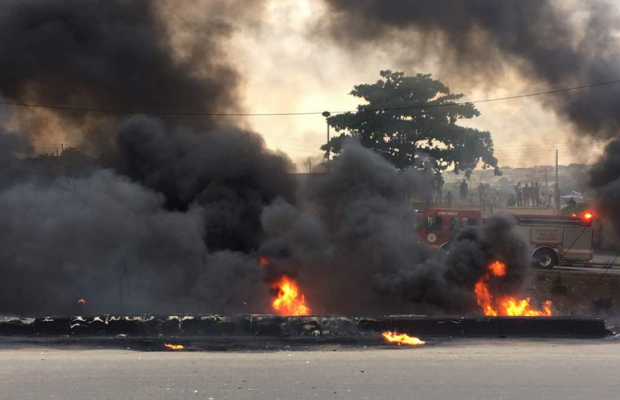 By Nkasi Kolie
No fewer than three persons have been confirmed dead and some other persons injured after a tanker fully loaded with petrol exploded in Amoke community of Apa Local Government area of Benue State on Monday morning.
The explosion which was said to have occured as a result of brake failure,  happened barely two months after two similar explosions in Oshigbudu in neighbouring Agatu Local Government area of the state in April this year.
SECURITY REPORTRRS.com sources in the area disclosed that the oil tanker loaded with petrol( Premium Motor Spirit, PMS) exploded at exactly 7:15am adding that it exploded three meters before the heart of Ugbokpo, the headquarters of Apa Local Government Area, Benue State.
“It is happening few weeks after two similar explosions in Oshigbudu, Agatu LGA, which resulted to the death of 11 people, injury to seven others, destruction of houses and properties worth millions of naira,” a source said.
“Apa and Agatu both share border and both host the newly constructed federal road,” our source who simply gave his name as Olikita’s said.
He explained further that the cause of incessant explosions along the road was still unknown but opined that it could be as a result of the narrowness of the road and several sharp bends on the road.
When contacted, Sector Commander of Federal Road Safety Corps (FRSC) in charge of Benue, Yakubu Mohammad confirmed the report saying three persons including the driver of the tanker lost their lives in the accident.
Mohammad who blamed the accident on brake failure however noted that the fire which raged for some hours had already been put under control at the time of this report.