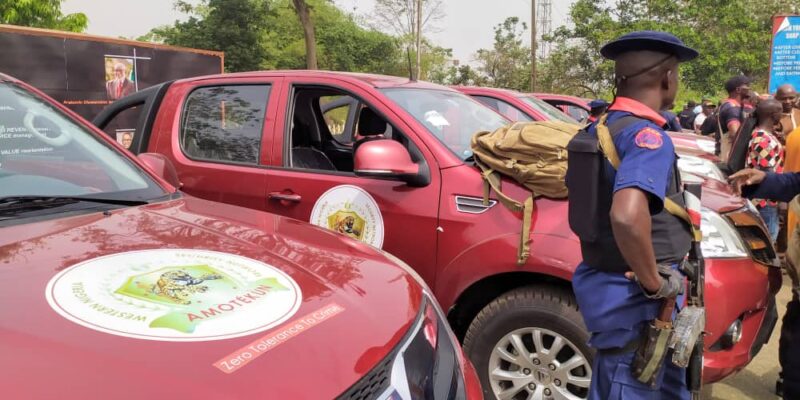 Nkasi Kolie
The Ekiti State Amotekun Corps has arrested three suspected kidnappers in a forest in Igbara Odo-Ekiti, Ekiti South West Local Government Area of the state.
The suspects were alleged to have attacked a woman and dispossessed her of her money along Erinjiyan-Igbara Odo road on Monday.
The Corp Commander in the state, Brig. Gen. Joe Komolafe (rtd), who identified the suspects as Abubakar Musa ,25, Yusuff Lawal, 20, and Babaginda Usman,30, said the suspects were arrested following a tip-off by members of the public and manhunt by operatives of Amotekun.
He said: “The suspects attacked the woman in the farm with machetes and inflicted wounds on her head. They escaped when they sighted other people entering the bush. The woman has been taken to the hospital where she is receiving medical attention.
“When apprehended and interrogated, they could not state their mission in the area and as well could not provide information on where they stayed. We will hand them over to the police for further investigation and possible prosecution” he said.
“This arrest was as a result of a timely tip-off. A woman was attacked on her farm yesterday and taken to hospital. But this morning, we directed the boys to go and search the bush and mount roadblock to make sure that the attackers did not escape.”
“When the suspects learned that Amotekun operatives were on the road, they decided to escape through the bush, it was then our men got hint again on the particular route they were passing. So, the other Amotekun detachment went to lay ambush for them and they were arrested.”
He advised residents to support the corps with relevant information on activities of criminal elements in their communities, saying the success of the Amotekun corps would be largely determined by the cooperation from the people.
“It is our appeal to residents to give timely information to security agencies so that we can swoop on them and arrest them. If you see strange faces, please report, you can be guaranteed secrecy of information. Give us timely information, my men are ready to enter into the bush and secure the state,” he said.
According to him:“For example, the unfortunate shooting incident of the Elewu of Ewu-Ekiti, Oba Adetutu Ajayi; there was no way that people in that community would say they had not seen strange faces in that forest.
“The same thing is applicable in the case of the petrol station manager that was kidnapped in Isan-Ekiti. There is no way some people in that area would say they did not see strange faces. Please, give timely information for security,” he added.