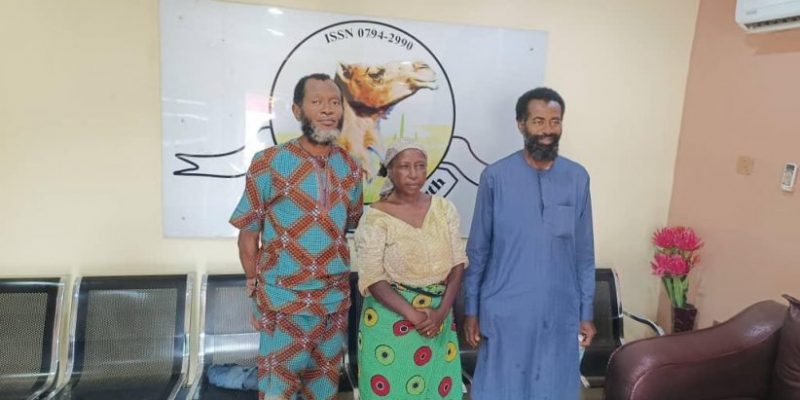 Four more hostages of the March 28, Abuja-Kaduna train attack have been released by terrorists after spending four months in captivity.

Tukur Mamu, Publisher of Kaduna-based Desert Herald and Media Consultant to controversial Islamic cleric, Sheikh Ahmad Gumi, who withdrew as one of the negotiators, confirmed the release of the four hostages to newsmen in Kaduna.

Those released included an 85-year-old woman, Hajiya Halimatu Atta, her daughter, Adams Aliyu and two others after .

Mamu also disclosed that if urgent steps were not taken, a 21-year-old Arzurfa Lois John might be married out to one of the terrorists as was in the case of Leah Sharibu, the Dapchi schoolgirl.

According to him, one of the terrorists’ commanders was said to be in love with Lois.

Mamu gave the identities of those released to include, Mama Halimatu Atta, her daughter, Adams, Mohammed Sani Abdulmaji (M.S Ustaz) (who suggested his (Mamu) names to the terrorists as one of those to mediate) as well as a Sokoto indigene, Alhaji Modin Modi Bodinga.

Mamu said the terrorists planned to marry off the 21-year-old girl, alerting the Federal Government and the Christian Association of Nigeria to act urgently.

According to him, the CAN must not politicize or take the information with levity, adding that relevant authorities should engage the abductors in her (Lois) case as soon as possible before it is late.

He said, “I can confirm that earlier on Friday, four additional victims of the train attack were released by their abductors. The four released victims just left my office.

federal government to intensify efforts as the condition of the remaining 23 victims they left at the forest is pathetic.

“Amongst those that were released on Friday includes the oldest victim, a grandmother, Mama Halimatu Atta. She is 90 years old. Also released is her daughter, a 53-year-old married woman, Adama Atta Aliyu, (the woman that was bravely shown in the last video protesting and challenging her captors and lamenting failure to secure their release).

“The victim that first suggested my name to the abductors, as one of those to be contacted to mediate between them and the federal government, Mohammed Sani Abdulmaji (M.S Ustaz) and a Sokoto indigene, Alhaji Modin Modi Bodinga were also released on Friday.

“This is to alert the federal government and especially the Christian Association of Nigeria (CAN) that I can confirm through credible information at my disposal that if urgent action is not taken to immediately secure the release of the youngest victim of the train attack, a 21-year-old Azurfa Lois John, the abductors as they have done in the case of Leah Sharibu are planning to marry her any moment from now. One of the top commanders is said to be in love with her.

“This important information should be treated with the urgency it deserves. Even though I know that releasing this information will not only unsettle her immediate family and loved ones but Nigerians as a whole, it is necessary to do so to avoid a repeat of Leah Sharibu’s case.

“I advise CAN in particular not to politicise this issue or reduce it to mere press releases as I have seen in the past but to work closely with relevant authorities to engage the abductors on her case as soon as possible before it is late.

“I pray that in view of the uncertainties which are becoming alarming, the federal government will also act very fast to ensure the release of all the remaining victims.”

There was no mention of whether or not ransom was paid for the release of the four hostages but the terrorists had demanded N100m per each victim before those earlier set free, were released.

With the release of the sixth batch of four hostages on Friday, 23 hostages are still in the custody of the terrorists.

On 28 March 2022, terrorists planted explosive devices along the rail track and when the Abuja-Kaduna bound AK-9 passenger train approached the point, the device exploded, causing the train to derail, leading to the death of eight passengers.