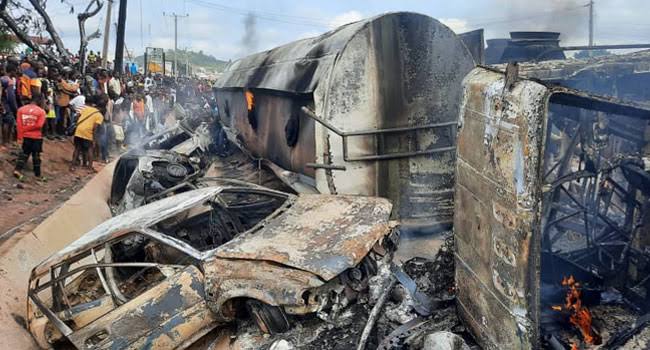 A tanker with full load of PMS, (petrol) lost control and fell at Bridge of Maboro River in Ankpa, headquarters of Ankpa local government area of Kogi state burning many people to death.

The incident was said to have occured around 3.30pm on Wednesday. While eye witness put the casualty figure at 20, the Federal Road Safety Corps said eight persons died.

The eyewitness said some of the victims were burnt beyond recognition and body parts and debris of cars liters in the area greatly.

“Many People were in the river doing one thing or the other when the tanker lost control, fell and exploded on the bridge. It’s horrible. The most gory scene I have seen in my life”, said Usman Ahmed from Ankpa.