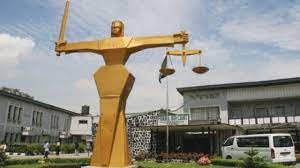 By Nkasi Kolie
A 39-year-old kidnapper, Charles Nikson has been sentenced to death by firing squad for his involvement in the abduction of one Mrs. Vivian Okoye and Dr Ogregade Ileimokumo, in November 2020.
Men of the Operation Puff Adder unit of the Bayelsa State Police Command had rescued the victims after a shoot-out with the gang and arrested Nikson.
The police subsequently arraigned him, while another suspect, David Ekegima, was arrested later on a two-count charge of conspiracy and kidnapping.
The Presiding Judge of Ogbia High Court sitting in Yenagoa, Justice Raphael Ajuwa, however, discharged and acquitted Ekegima.
Justice Ajuwa, while delivering his ruling on the matter, yesterday, said he found Nikson guilty of the two charges.
“On the charge of conspiracy, there is no specific term for the charge and I, hereby, sentence you to 10 years imprisonment,” he pronounced.
Justice Ajuwa further said that the law says anybody convicted of kidnapping either die by hanging or firing squad. She, therefore, declared him sentenced to death by firing squad.